You are here: Home / Yoga Articles / Starting • The Foundations of Yoga / Home Yoga Practice / Learning, laughter and letting go: Hazel on her first 10 days of a Hot Yoga Challenge 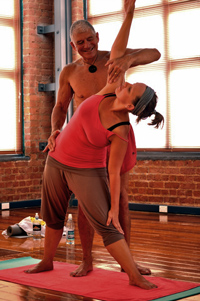 This was the reaction of one of my friends when I told her I was entering into a 40 day Hot Yoga challenge.

And, I have to admit, over the past 10 days I have often asked myself that very same question.

At the beginning of last week, just days into the challenge, it would have been an unequivocal yes. And let me tell you why.

For the first few days of this challenge I ached.

Muscles which I didn’t even know I had ached.

All I could think about was how much doing this much yoga hurts and how mad I must be to be putting myself through it.

But as the days, and classes, have gone on, the aches have lessened. Now quarter of the way through and over that initial hurdle, my body is no longer screaming at me. It still cries out, but the noise is much quieter.

I believe there are two reasons for this. The first is the obvious one. Like with any form of exercise, my muscles are becoming stronger, my endurance is better and, as expected, I am becoming more flexible.

But there is another reason.

When I started this challenge I was treating each class like an exercise class. And why the physical benefits of yoga are undisputed, yoga is not sport. Yoga is life. Slowly my mind has stopped trying to control each class. I have stopped trying to do each posture as well as my neighbour. Instead, I am slowly learning to let my body take over. Let my body do the yoga. Or, as Claire would say, let the yoga take my body.

By the end of the first week I had had a break through.

As I stopped forcing my body into the postures and instead letting it naturally lead them where they wanted to go, I have started to feel much more in control. My mind isn’t rushing me through the class anymore. My mind has sat back quietly and lets my body take it’s time. And the results, though small at the moment, have been fantastic.

Let me give you an example.

Back bends have always been a challenge for me. They have always made my head spin like I am on a rollercoaster, and this has made me dread them. But, as I stopped forcing myself to go further back than my body was ready for, and started letting my muscles take over, they have become easier. And, in doing this, I have in fact found myself naturally going backwards further and further, without even thinking about it.

So, learning to let my body take over was the first break through of this first quarter – and the one which convinced me I wasn’t mad.

However, the second break through almost convinced me I was mad again, but for a different reason.

It came during a Yin class this week.

Now, I have always known that yoga not only benefits you on the outside, but also on the inside. I knew it, but I wasn’t sure if I really believed it. Yes, I felt peaceful in some classes. And, yes, I felt energised and buzzing after most practices. But the cynical journalist in me still refused to completely buy into it. Could this practice really bring balance to my life? Was it having effects on my inner being that I couldn’t see? I wasn’t convinced.

But this week I had probably the biggest breakthrough in this area during all the years I have practiced.

It all came down to a burst of unexplained laughter, which bubbled out of me unexpectedly right in the middle of a Yin class.

There was no explanation for it. I was not thinking about anything funny. I wasn’t laughing at any of my other yogis (I promise). It just happened while I was lying peacefully in sleeping swan.

Funnily enough, later in that class, Claire actually told a story of a yogi who felt like she wanted to cry in a certain posture, despite feeling fine when she entered the class. She explained that bursts of unexpected emotions just meant the yoga was working.

And that was it for me.

I know now that the journey this yoga adventure is taking me is not just simply physical. It is also emotional. And personal. And since that class my expectations of what this challenge can mean for me has grown 10 fold. I now feel like this has not just been the start of the challenge, but the start of a change in myself.

There is also a second part to this challenge which has taken much less adjusting to.

Following each class, not only do I have the joy of sticking a brightly coloured sticker on the board, but I pick up my green juice smoothie. To begin with I guzzled the whole thing as I walked home from the studio. But it only took two times of doing this to realise that I wasn’t reaping the full benefits (and it was making me feel rather sick). So, now I take it home with me and just as the wave of tiredness begins to hit me about 30 minutes after a class, I drink my smoothie. The burst of goodness is like fuel to a fire, giving me that boost and that rehydration that I need.

So that has been my first 10 days.

But what I haven’t told you is that during these 10 days I haven’t been working full time, so fitting the yoga around my life has been pretty easy. However, during the next 30 days I will be, like Dolly Parton said, working 9 to 5.

Not sure if I will ever be able to get up for the 6.30am class, but we will see. 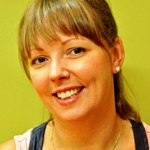 Hazel is a freelance writer who believes that the written word has the power to move mountains.

Growing up in England, Hazel spent many years working as a writer and journalist, before bringing her love for the written word to New Zealand.

Hazel discovered a love for all things Yogi almost five years ago while living in London, but she has never undergone such an immense undertaking as the 40-day challenge.

She’s hoping to combine her passion of yoga and writing for a truly enriching experience for both herself and her readers.

Held twice a year, a Hot Yoga 40-Day Challenge is a personal commitment to 5 yoga classes a week with 5 minutes of quiet time each session. A daily green smoothie and attendance at special Hot Yoga events expand the Challenge experience. Students discover the power that comes with a sustained yoga practice. Check out Hot Yoga’s website to find out when the next challenge starts.