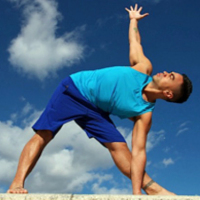 Formerly a competitive sportsman, representing New Zealand in springboard diving, gymnastics, and aerobics, Jason is now part of the Power Living Australia team and will be joining Justine Hamill in facilitating the Power Living 200HR Yoga Teacher Training, starting in NZ in April 2015. (Note: there’s another intake in September 2015.)

The first is that the programme is spread over four months so you have time to integrate and process the learnings before coming back for the next instalment.

A second advantage of the Power Living Teacher Training programme is the emphasis that’s placed on working with core negative beliefs. Power Living Yoga firmly understands that ultimately yoga practice is about the psyche, and that yoga teachers need to be actively working with the samskaras and vasanas within to be the best teachers they can be.

Through the negative core belief work that’s done, trainees learn a process for identifying when they have been triggered by life’s circumstances and working with a process of self-inquiry to better understand their own psyche.

The third advantage of the programme is that one week of the teacher training is spent in immersion in Bali along with 500HR teacher trainees and retreat attendees. This structure is endemic of Power Living style – it’s all about community.

When you join a Power Living Teacher Training programme, you’re becoming part of a growing community not just here in New Zealand but also in Australia. (See the bottom of this article for all the info on the programme.)

It’s a drawcard that Jase understands well. That feeling of community within the Power Living family was one aspect that drew him into the studio, and then into teacher training himself.

“I really connect with whanaunatanaga, with family. And it (Power Living) felt like family.”

That strong connection to family is why Jase, as he’s usually known, is  so excited about coming back to his home – New Zealand – to share his passion for yoga and teaching with fellow Kiwis.

“I love sharing the beautiful teachings of yoga with others. You can see when the penny drops with someone – when people get past the physical element of yoga, and realise it’s something deeper Just because you can put your shin up by your nose doesn’t mean you’re a good person.”

Over-working his body led to a dance injury over a decade ago and Jase turned to yoga for rehabilitation. He soon discovered yoga was about far more than the physical though, and embraced the philosophical roots of the practice.

Eventually he found his way to a Power Living Studio and felt in many ways like he’d come home.

“The thing that struck me most about the Power Living experience was the community. I fell in love. Up until then my personal practice had been quite private but there it was a shared journey.”

Jase had a rich cultural up-bringing in New Zealand, immersed in Maori culture and speaking Te Reo at home – he didn’t speak his first English word until he was 5 and going to school.

He found the same deep connection to all things he experienced through Maori culture in yogic culture and that depth of philosophy was one aspect that drew him to Power Living Yoga.

“What I love about the Power Living teaching… is bringing the traditional teachings into the modern world.”

A natural-born teacher at home with his body, the next evolution in his practice to start teaching yoga, and then teaching the teachers. Jase is excited about being in New Zealand to deliver the Power Living 200HR training.

It’s interesting to note that Power Living classes now sometimes have an almost even gender balance in their Australian studios.

While we have yet to see that here in New Zealand, having men like Jase Te Patu share their passion and love for the depths of yoga helps to send that message that yoga is a powerful practice for both men and women.

When I asked Jase what message he would give to men who hadn’t tried yoga yet, he responded:

“Be brave. Be courageous. Because you might just be surprised about what you discover about your body, and more importantly about yourself. Yoga allows you to discover who you truly are, rather than who you think you should be.”

As well is facilitating the Power Living 200HR Teacher Training, it’s just been announced that Jase will also be teaching at Wanderlust NZ in 2015.

Plus, plans are underway for Jase to open a Power Living Studio in Wellington in 2015, along with fellow kiwi Justine Hamill. Watch this space on that one!

Tune in to our interview below to hear what Jason has to share:

On his Kiwi heritage:

“I’m such a proud kiwi. I think I overwhelm people with how proud I am.”

On the link between Maori traditions and yogic traditions:

“In Maori culture we are connected through our gods… to all the elements of the world.

On how we found yoga:

“I found yoga because I was a cast for 12 weeks and I couldn’t move and the only thing I could do physically after the cast came off was yoga. I immediately fell in love with reconnecting back to my body again.”

“I went to my first yoga class and I thought ‘I’m flexible. I’m a dancer. I can do all of these postures.’… And I was so humbled… There was a seventy year old lady there… and I was huffing and puffing trying to keep up with her. And then I just gave in… And that really humbled me in a great way.”

On what students will get from the Power Living 200 hour Teacher Training in New Zealand April 2015:

“There’s lots of practice of you teaching… we have a sequence that we teach everyone… so out of it you get a solid vinyasa sequence that you can go and teach safely…. You have a base to start with.”

On his classes at Wanderlust NZ 2015:

“Through breath, through bandha, we’ll discover our body and just listening and seeing how when we’re challenged and the legs are shaking, where do we go?” 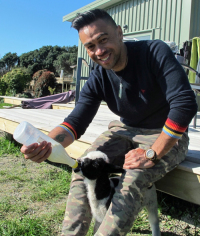 A proud Maori man, Jase’s inspiration comes from being deeply rooted in his culture, no matter where he is in the world. He lives a life of gratitude, treating others with kindness, loving all living things and honouring Mother Earth (Papatuanuku). From these strong foundations and with a passion for meditation, Jase has found a way to connect with others from the heart – openly and easily. He loves how the Maori traditions and teachings are beautifully aligned with the traditional teachings of Yoga.

Through the dance quality of his Vinyasa Yoga teaching, Jase brings synergy and expression through movement and breath, and an awareness to the endless potential of the heart.

Jase has studied with Duncan Peak & Power Living, Les Levanthal, Kathryn Budig, Ana Forest, Eion Finn, Mark Breadner, Tiffany Cruickshank and Bikram Choudry. With over 20 years’ teaching experience he was an international trainer and choreographer for the dance-based programme, Body Jam, for Les Mills International. He has also travelled the globe as a dancer, singer and actor most recently with Disney’s The Lion King in Australia.

Jase is a senior member of the Power Living Australia team.