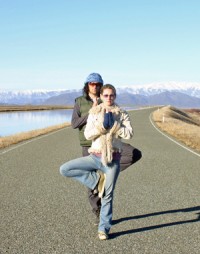 Over the months I’ve been writing Musings from Mat, I’ve spoken a great deal about my relationship challenges – and there’s been a few. My partner and I have been together for three years now, and as he’s fond of saying, we were both mad when we got together. Not quite, but close enough.

It’s been the most challenging relationship I have ever had, and the most rewarding. I have left no less than seven times in those three years – including twice while pregnant and once after Samuel was born. Not because there was no love, but because there was too much pain.

Over these three years, my experience of the relationship shifted from constantly seeing what was wrong with Luke, to understanding that I was looking in a mirror. Our intensity – and man are we intense – is such that I have a strong sense that he is me and I am him. I know we are each other.

Being with Luke has been the biggest growth opportunity of my life, and it’s been my incredible love for him that has allowed me to weather the storm. Being with Luke has dug up all my unconscious shit and dumped it in the middle of our living room for me to deal with. And his too 😉

See, I was real good at being unconscious and living in denial about my weaknesses, my shit… but Luke is real good at seeing my weaknesses and shit, and he’s never been afraid to call me on it. Makes for a painful way of living in some ways… but oh so powerful in others.

We went through a stage where I knew he was being emotional and verbally abusive. Common sense says leave. But I knew, deep down, that if I was in a relationship with an emotionally abusive man, that something inside of me was being called to heal.

And when I did heal it, the emotional abuse stopped immediately. All of a sudden, Luke just wasn’t that way anymore. It made me realise how incredibly powerful relationship is along the journey to wholeness and integration. In fact, it’s all there is really.

I know now that when I can see Luke’s shadow, aspects of my shadow are being called to the surface. I also know that I don’t need to change him at all. I just need to pay heed to what’s going on for me, what I’m being called to do…

And fuck if it hasn’t been the toughest thing I have ever done. At times, I’d just think, enough already! I’m sick of this, I don’t want this, why is this so damn hard, why is this being asked of me, stop it already! But I always knew I was strong enough to rise to the challenge, strong enough to step up and do what was being asked. So I did. Over, and over, and over again.

Throughout this entire experience, two things have been consistent. Luke’s love for me – deeper and stronger than anything I’d experienced before. And my love for him – unconditional and unwavering.

I’ve had the honour of watching him flower in front of me, watching him grow into his fullest potential – not because of anything that I’ve done, but because of all the work that he’s done. He’s one helluva man, this partner of mine, and I know I’m truly blessed to have him in my life.

It’s hard now to remember some of the grief we want through originally. I know that there was drama, lots of it, and I would often call my Mum or my sister drowning in tears, a puddle on the ground, so incredibly distraught as the relationship brought up and triggered old emotional stuff that needed healing. (Thank you Mum and LE for your unwavering support!!!)

There won’t be any more leavin’ now. I’m done with leavin’. And I feel great power in that – in knowing that whatever arises for us as individuals and as a couple, that there we’ll be, holding the course, holding the space, supporting each other in our path.

Probably the biggest help through all of this has been the understanding that he is me and I am him. We are each other.

It’s a concept Steve Pavlina (Personal Development for Smart People: The Conscious Pursuit of Personal Growth)is exploring through subjective relationships right now, and I believe – no, I KNOW, that Steve is modeling a modality of healing that will have an enormous impact in the world for those who get it.

Here’s Steve describing how subjective reality applies to his relationship with his partner Rachelle:

I stopped seeing Rachelle as a separate individual, and I began to interact with her as a dream character, a projection of the dreamer’s subconscious. This had the effect of allowing me to release all judgments and expectations of her. I began to see her through different eyes, with a sense of child-like wonder, amazement, and curiosity.

When I communicate with her, I do my best to interpret what she says much like it’s a part of my own subconscious talking to me. It’s impossible for me to disagree with her about anything in that state, so I have to “yes, and” everything she says. After all, it’s coming from me.

When Rachelle raises a concern, I treat it as my own. I look within myself to see why I’m now expressing that concern through the character of Rachelle. By dialoging with her about it, I listen carefully to understand that aspect of myself. Then if I perceive a problem to be solved, I solve it within. And almost magically, Rachelle herself releases that concern and expresses a positive shift. I don’t even have to tell her how I worked it out. She just starts behaving differently.

I’ve done the same with many of my other relationships, and it’s been incredibly healing. I can’t possibly share all of it, as the details would require literally days of typing. But I can say it’s been absolutely magical.

Of course, often I’ll “forget” all about this and get stuck in the old way of thinking that he’s got to change to fix things. That way invariably leads to grief, because for one thing, it means I’m not accepting him just as he is, and acceptance is a major part of love. It may be the only part of love that really matters. It’s impossible to love when you can’t accept.

Through out our relationship, one of the most important tools I’ve worked with has been meditation. In fact, it’s probably the only reason I’ve/we’ve made it this far. Meditation taught me to observe the feelings and thoughts arising, and just sit with them – not reacting, not creating more drama, not telling myself a story. The more I established a centre of being and groundedness through meditation, the more I was able to sit with whatever emotional pain arose.

Of course, these tools and ways of perceiving relationship don’t just apply to our significant others. I have a yoga student and friend who’s been in my life for a few years now. I have great admiration for the way in which she’s worked through discomfort to apply herself to yoga classes – coming to my classes over and over again, going to class in different countries, or with visiting master teachers she perceived as being too tough for her.

Over the last week or so, she’s been in contact with me via text and email. Through this dialogue, I finally grasped an internal aspect of her that had been at the edge of my awareness for a long time. This particular student is always a bringer of gifts, an offer of information, support and stuff. I understood this weekend that what underlies this generousity is a sense that she believes on some deep level that she is not enough. That she has to bring something extra of worth – that she herself is not enough. (And of course, she is. She’s perfect, just as she is, with or with out gifts to bring.)

As I saw this, I turned it around and asked myself, when do I believe that I am not enough? Where do I hold that belief? And I could see it within myself. I could see how it had undermined my relationship with Luke, adding a layer of tension.  I saw how that sense of not being enough played out yesterday morning, when I turned up at a friend’s house and felt like I couldn’t offer the yoga I thought they were expecting.

Through my perception of this belief in my friend, I was able to bring to the surface this belief in me, and so heal and release it. I haven’t shared my understanding with my friend – I’m curious as to whether me acknowledging it and healing it within myself will lead to a healing within her without us having to directly talk about it. No doubt she’ll read it in this article though 🙂

Stepping into this way of being in relationship is extraordinarily powerful. And it can be difficult. It asks us to look closely at ourselves whenever we encounter any conflict or tension with another person. Because the only true conflict or tension lies within.

Steve describes this process of subjective relationship likes this:

What part of my subconscious is being expressed through him/her? Then I seek to heal my relationship with that part of myself. The primary vehicles for that are acceptance and forgiveness and unconditional love.

When I heal that part of myself, the relationship with the other person automatically improves.

I’ve had four days away from Luke on this trip to Wellington – four days to live from inspiration, and to play with subjective reality to an extent. I know I’ve shifted some major stuff since I’ve been away, and from our contact via text and phone, I know he has too. I’m excited to see how this manifests in our relationship when I get home this evening.

I also feel like I’m ready and able to more consistently apply the principles of subjectivity to our relationship, asking myself, what in me needs healing? What in me is being called to the surface?

It’s been a long, hard road finding the perfect man… and damn it all, if I don’t want to just enjoy it now;)