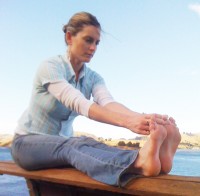 
There’s suspicion about Bikram himself, about the yoga competitions that he and his wife run, about the concept of getting yoga into the Olympics (yep, that’s one of their goals – yoga in the Olympics). About Bikram being McYoga. All of the appearance of being yoga with none of the goodness.