You are here: Home / Yoga Articles / Awakening • Creating a More Beautiful World / Musings from the Mat / Is Bikram Choudhury really an alien? 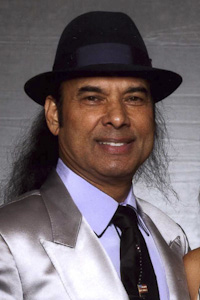 On Sunday I drove a 440 km round-trip to see Bikram Choudbury speak.

Was it worth it?

Not only did I get to meet more of the NZ yoga community, but I also got to check out Bikram The Man in person as he took the stage for a three and a half hour lecture.

Yep that’s right – Bikram spoke with barely a pause for breath for over three hours, and if it hadn’t been for the insistence of the organizers, he would have kept on going. And going. And going.

Fortunately for the captive audience, Bikram is an engaging, entertaining and informative speaker that knows his stuff, and he knows how to deliver it.

That’s why 95% of the audience lasted the distance, as Bikram regaled us with stories of losing his virginity, healing the President of the United States, and conquering the world with his style of Hatha Yoga.

In between, he gave us a philosophical lecture on the true nature of yoga.

Yoga is a path to Self-realisation.

That was the guts of those three hours.

Plus a few other choice tidbits like focusing on the good of what’s happening in every moment.

That there is no right and wrong, just what works and what doesn’t work.

And that he doesn’t have to prove anything, because medical science hasn’t yet caught up to the power of yoga.

It was fascinating. It was informative. And it was totally focused on the spiritual nature of yoga – on Self-realization.

During the lecture, I found myself swinging, somewhat wildly, from one perspective to another.

As Bikram spoke about his passion to help as many people as possible live a good life through the power of yoga, I was thinking, I love this guy!

But later, when audience members asked serious questions about whether or not Bikram Yoga could help them avoid encroaching blindness, or heal from breast cancer, I cringed at his answers.

Bikram just pulled out another story from his anecdote repository while saying:

And maybe it can, but not everything, and not at all times. Those audience members who stood to ask questions weren’t truly listened to, nor responded to.

Bikram heard their question, and answered like he was a robot, reading off the tape in his head.

Even worse, when the audience member asked about breast cancer, it reminded Bikram of a “micro-endoscopy for breast cancer detection” that he’s invented. That unleashed a ten minute spiel on what this tool is and how it will irradiate breast cancer.

This lack of presence is probably the biggest thing I noticed. It felt like Bikram was projecting out to us as he spoke, it didn’t feel like he was connected to us or with us.

I’ve seen a few spiritual teachers and high level yoga teachers over the years, and one thing they usually have in common is presence. It’s hard to quantify this, but it’s like they go far beyond the confines of their body and almost envelop the room with their very being.

I didn’t get this sense with Bikram at all.

He seemed quite contained.

Mostly it felt like he was delivering a performance, one that he was so invested in that it’s not a performance to him at all. He is who he is, and it’s working for him – and the millions of people who have been helped by Bikram Yoga. He knows his yoga, inside and out, and he cares about people.

Bikram is also incredibly youthful and lithe in his body, so much so, that it almost felt like his body and his head were disconnected.

This made me wonder if he’s disconnected – which would account for the lack of connection that I felt from him on stage. It was a strange feeling, almost like he was this alien bouncing around on stage delivering these set pieces.

However, it also felt like Bikram genuinely cares about the people he works with, and in fact, all people. He wants to help people live a good life, and doing so makes him feel really, really good. But it didn’t feel like this caring and passion for helping people came from the heart – perhaps instead from the intellect, or the ego.

There was also a nervousness I detected.

A restlessness to his energy.

A deep-seated fear of just… being. Like he was running from himself. Bikram himself says in this interview that he doesn’t like to be alone.

I cannot be alone more than half an hour. I love to be with people. I communicate well with people, I know them well. I love and enjoy people. That’s my life.

The Bikram teachers who host Bikram as he travels around the world can vouch for this. Bikram is famous for not sleeping. No more than two hours a night. Neither does he eat much. And because he doesn’t like to be alone, that means the teachers who host him know they’re up for a wild ride when he’s around. Bollywood movies at 2am are not uncommon.

It’s a crazy, wild timetable Bikram sticks too, and by all accounts, it’s a lifestyle he loves.

Today, doing some research for this article, I came across this 2005 LA Yoga Magazine interview with Bikram. When the interviewer asks Bikram why he does this work, he answers:

My guru gave me my mantra: make them happy, you will be happy. A lot of people think that I am doing a lot of things for people, actually not. I’m a selfish person. I give up everything for my life, to teach yoga, save people’s lives, to change people’s lives. Why? Because that’s the only way I can feed my spiritual need. That’s my spiritual practice. I tried everything else, but at the end of the day, I get nothing, dry.

But when some person comes in a wheelchair to my class, after one month she walks out, smiling face, brings me a shirt, gives me a cheesecake, says “I never thought I would live to do it again in my life,” a big, smiling face, that feeds my spiritual activity, my happiness, my satisfaction of living. That keeps going, after all these years, nothing in the world can stop me. So, if I’m happy, I can make more people like you happy.

I think that’s it.

It certainly felt like he was feeding on the energy of the audience on Sunday night. He loved being up there speaking, sharing his stories and his wisdom, inspiring people to do more yoga.

Maybe that’s why he doesn’t need to sleep to refuel, or eat to refuel.

Presence or no presence, maybe Bikram is just some kind of alien that feeds on making people happy.

Seems to  be working, for both him, and the millions of people who’ve tried Bikram Yoga.