You are here: Home / Yoga Articles / Deepening • The Yoga of Life / Yoga & Ayurveda / Introducing “Yoga on a Plate:” A New Column for the Yoga Lunchbox 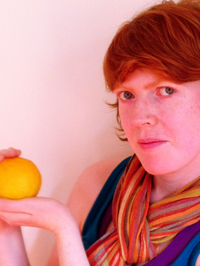 If you asked me to name the things—people not included—that make me happiest, yoga and good food would be at the top of the list. So writing a column that combined my passions for both of those things seemed like a no-brainer.

Except that the more I began to sit down and think about it, the more challenging and the more daunting it became.

Many of us, whether yogis or not, have complicated relationships with food at some point in our lifetime.

For many, these struggles are ongoing. And what’s “healthy” for one person can be the exact opposite for another.

With so much information out there already trying to define how we eat or how we should be eating, I wondered if it was worth it to add yet another voice to the mix.  (Since you’re currently reading this, obviously my answer was yes!)

But before we go any further, let me give you an overview of who I am, why I’m writing this column, and what I hope for it to be.

Born in the United States, I began cooking as a child when my parents gave me a copy of Betty Crockers’ Cookbook for Boys and Girls for my 8th birthday.

I read it from cover to cover and tried just about every recipe in the book. At age 12, I decided to stop eating meat. I scoured the public library for vegetarian cookbooks, and discovered a whole new world of food beyond what I’d grown up with. I became more adventurous in my cooking with each new recipe I tried.

Admittedly, I was no immediate prodigy in the kitchen—my older sister still loves to tell the story of my attempt to roast chestnuts in the oven that almost burned down the house! But over the years I became more and more skilled, and my cooking has been influenced by my travels, which include cooking classes in Bangkok and a year spent living and studying in Florence, Italy.

I first began practicing yoga over seven years ago after a friend and yogini recommended it for my chronically tight back and shoulders. Initially, I made every excuse in the book why yoga wasn’t right for me, and it was a while before I actually got myself to that first class.

But as soon as I did, I was hooked. The more I practiced yoga, the better I felt– both physically and emotionally.

Over the next five years, I found innumerable benefits from a dedicated yoga practice, and in 2010 began a year-long yoga teacher training program in tantric hatha yoga at Samadhi Yoga Studio in Manchester, Connecticut.

It was a year that literally changed everything in my life.

The more deeply I began to study yoga and ayurveda, yoga’s healthy living sister science, the more I realized that the professional success I had achieved in my career wasn’t actually what I wanted. What I wanted was to leave it all behind and to follow my heart.

I quit my job in the US and moved to Wellington in August 2011. Currently I teach yoga at several studios and gyms around the city. In my yoga classes, I often tell my students to let their practice be an exploration—to let go of any goals or expectations about what their practice–or even a particular posture– is supposed to be, and let themselves experience whatever it actually is in that moment.

This column will be a similar exploration. I’m excited to share my knowledge of yoga, ayurveda, and food, and grateful for the opportunity to learn more myself along the way.

There is a natural connection between yoga and food, as well as the energy centres, or chakras, in the body.

In yoga, it’s said that the belly is governed by the third of the seven energy chakras in the body. This third chakra, Manipura Chakra, is associated with digestion and metabolism on a physical level, and is the space where the body converts the food we eat into the energy we use to live our lives. On a mental and spiritual level, Manipura Chakra is associated with self-esteem, transformative energy, and determination.

A healthy, spirited third chakra supports us in overcoming inertia, jump-starting our ‘get-up-and-go’ attitude so that we can take risks, assert our will, and assume responsibility for our life… When you feel disempowered or in need of re-energizing, third chakra poses fan the flames of your inner fire and restore vitality so that you can move from the strength of your core.

Yoga on a Plate is meant to be an offering. I may propose foods or digestion-inspired sequences for you to try and ask you to experiment with how my suggestions feel for you and your body.

What I hope to do is to put forward new ways of looking at the connections between the food we eat and the way we live, and offer suggestions for foods that you may find support and compliment your practice. It’s completely up to you if you want to try them or not.

I do hope you’ll join me over the coming weeks and months as we explore the yoga of food together.