You are here: Home / Yoga Articles / Awakening • Creating a More Beautiful World / Musings from the Mat / I’m only woman when there should be man as well 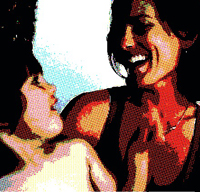 Seems a potent time to write.

Learning to not make drama out of the drama. I’m up. I’m down. It’s all just a ride. Hang on, stay centered, don’t forget to take in the view.

It’s relentless. Designed that way I guess. No time to come up for air, except the time you make. There’s always time. I know that. Talk about it in my book. Yoga. That’s the time we make.

Yoga’s my secret weapon against tantrums and pinching and biting and yelling and screaming and all the other joys of my day to day life right now. Works most of the time.

Except when my shit comes up. Toss in a tantruming three year old with surfacing emotions and I begin to crack.

This weekend, on the yoga conference, I watched other parents. They usually come in twos. One takes the children, the other goes to class. Then they swap. One tends the child, the other adult tends the child carer. I had a taste of that, as my friends stepped in to help out – I got to go to class, I had dishes washed for me and food brought to me.

Somehow though, that taste of double-adult action makes my heart ache all the more.

As does watching my son with my male friends as he delights in being boy to their man. All weekend, he was asking after other boys and men.

It’s something I can’t give him, no matter how hard I try or wish to. There’s only one of me and I’m all woman.

And maybe that’s where this sense of loss arising today has come from. We’re only two when we should be three. I’m only woman when there should be man as well.

I’m only human when a single parent needs to be a super hero.

It’s got me reflecting – on men and relationship. It’s been nearly two and a half years since I left Samuel’s father. The longest I’ve been single as an adult. (A couple of short-term relating experiences along the way).

I’ve been so wrapped up in working hard to build financial independence for Samuel and I, and a path for myself as a writer and teacher that men and relationships haven’t featured. Plus I live in a small town at the end of the world.

What are the chances of a man walking into my town?

But I know better than that. I know our internal world has much to say about our external experience. I know where there’s a will, there’s a way. I know that what we focus on, we create.

Witness the publishing of a book in six months. If I can make a book, I can open to a relationship. Yet I’ve been reluctant to turn my manifesting talents on a relationship – wary that it’s desperate to want to be in a relationship at all. Desperate or needy or something.

Today, a friend passed on an article about spiritual relationship and as I read it I knew. That’s what I want. Not a relationship that’s co-dependent or clingy or needy.

No, I want a relationship with a clear intention to support the spiritual growth of each person.

I’ve had tastes of this, in a relationship I had last year for a few months. A beautiful man and close friend, we brought our full awareness to the time we spent together and both of us grew, even if ultimately our growing wasn’t along the same path.

Then though, I still had to find my own feet in my life – I had to find and write my book. That done, it’s time to turn my attention to other manifesting. And as I suggest in Forty Days of Yoga, there’s nothing like announcing an intention publicly to help it along. (Witness the book itself).

So it’s spiritual union I intend – two people who have a wider, broader, deeper perspective on the nature of relating and understand that there is nothing to hold on to – no relationship as such. All there ever is is moments to open, and to feel, and to respond.

Intimate relationships trigger all our shit, and it’s easy to blame the other person for what we’re feeling.

It’s far harder to take responsibility for it and allow them to support us as we work through and let go of it. It’s also tough to stay open and close to the person who’s triggering our shit – we either run like hell or fight like hell.

Call it the yoga of relating if you like. An aligning to truth when two people dare to share all.

I’m ready to step into that again – whether it turns up next week, next month or next year. It doesn’t matter, as nothing is lacking in me right now.

I am full – and what a place to share from.