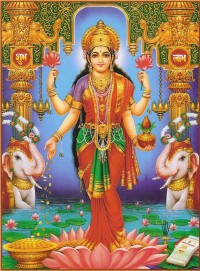 The Goddess of Spiritual and Material Wealth, Lakshmi

Six months or so ago, I launched Prana Flow yoga classes with the intention of carrying out a social experiment on value and yoga.

I wanted to know:

If people were allowed to determine the value of a 75 minute yoga class all by themselves, what value would they arrive at?

Here’s the original article: Prana Flow Yoga launches classes where students decide how much to pay.

Now my experiment had some limitations.

Because it was also designed to remove financial barriers to yoga, so that those on a limited income – beneficiaries, students, families – could also come along and pay what they could, I knew the data would be skewed downward somewhat.

This meant their payment wouldn’t necessarily reflect what they thought the class was worth, but what they could afford. However, based on the demographic we’ve had coming through the doors over the last six months or so, people on low incomes probably only represent about 10 – 20% of our sample size, not enough to skew it too significantly.

Before I give you my roughly -collated results, I want you to take a moment to think about what a yoga class is worth to you. See if your number matches my number.

Given that regular practice of yoga has enumerable health benefits – physically, emotionally and mentally.

Given that a yoga class makes you feel pretty damn good.

How much is it worth?

…a Yoga class is worth about $5, give or talk a dollar or two.

About the same as a coffee.

Or half a beer.

Or an hour of parking.

Yep, here in Wellington, on average, a 75 minute yoga class is worth the same to us as having somewhere to leave our car while we go off and meet friends for coffee, or shop.

Is that about what you decided a class was worth to you?

Or is something else at work here?

Do our figures actually tell us something us entirely?

Do we value our yoga far more than that… but are just not putting our money where our dharma is because we don’t have to?

Hell, it’s a donation class right, I can give whatever I feel like giving. And what I choose to give is not based on what I feel the experience was worth to me… but what I can get away with giving.

Shit, that class was worth at least $100 because that’s how damn good it made me feel, but I don’t have to give that much to get that $100 worth of value so why bother?

Now, before I go on, let’s make a couple of things clear.

Teaching via seva (service) is part of Karma Yoga, which means we give of ourselves with no expectations nor attachment to results. You give, whatever comes, comes.

I had no expectations with these classes, and I had no attachments to results. I was curious. And I wanted to teach this way.

But part of the process is creating discussion and mindfulness about the way that we channel our energy – and money is just energy.

It’s time to start that discussion. Not because I want more people to pay more so Marianne and I make more.

Nope – couldn’t care less. Although at some stage, when I look at how I am investing the energy in my life and how that energy is flowing back to me, it does make sense to shift from putting energy into places that are stagnant or just a trickle and instead reinvest it into other areas that are flowing. That’s just conscious living.

Nope – I want to have this discussion because the amount of cash per head coming in tells me there is a lack of mindfulness and awareness around money, abundance, energy, scarcity and limitation.

Not all students are present or aware when they place money in the box.

Before I talk more about that, I want to talk about the students who are giving abundantly of their energy.

Some students may be dropping in a gold coin and be completely aware and present, and that may represent what they are able to afford that week. Awesome stuff.

Other students consistently leave me $20, and/or rock up with other things like Yogi Tea for Expectant Moms (love it!). Also awesome stuff.

Another of my students regularly gives $5 a class (I think – he may be dropping in more sometimes!) – and he also gives a huge amount of joyful loving energy and has sent me some beautiful texts of thanks that came at the right time. So the total energy he is giving is far more than just that $5.

A couple of other students have turned out to be most excellent ambassadors and regularly bring new people along to class. A beautiful way of expressing how they value class.

See something I likely didn’t make clear when I began this social experiment is teaching by seva doesn’t mean money is the only thing acceptable to give.

Giving of yourself, your time, your baking, or any other thing is also… awesome stuff.

If you decide to come along for five weeks straight, and kick off your five week commitment by dropping in a voucher for a 90 minute massage because you’re a masseuse and 90 minutes of your time is worth five yoga classes – awesome stuff!

That’s how we create abundance in our world.

But with most of our regular students are either giving $5, or $10, or $20 dollars every class, plus their energy in other ways… how the hell does Marianne have a class like Monday?

Even more so because Marianne had left her house in Paekakariki at 5pm to travel down to Wellington to teach this 7pm class.

Now I know that there is a lot of embarrassment and strange feelings around money. I know people find the whole concept of seva difficult. They’re worried about what they’re putting in. They’re afraid it’s not enough. They’re awkward as they do it. Trust me – I feel the energy. This is especially true of new students. They’re unsure and feel weird. Likely some of them literally avoid putting anything in because it doesn’t make them feel good. They just scoot out the door.

And maybe that’s one of the reasons we end up with a situation like Monday, which happens about once every two weeks or so.

However it doesn’t feel good on our end.

And I’m guessing it doesn’t feel good on the end of the students either.

Marianne and I have talked about our options.

We could just start charging – drop in rates are usually between $12 & $18 per yoga class in Wellington and we’d likely make more money even if we lost some students.

But neither of us wants to do that. We don’t want people to not be able to come because it’s out of their budget.

We could suggest an appropriate level of “payment”, $10/$5 for waged/unwaged type of thing.

But I don’t want to do that either because I don’t want to set any expectations. If we do that, we lose a huge opportunity to address abundance, flow and energy and how we as a community create value amongst ourselves.

So instead this is the first step.

And I know the issue of how much a yoga class is worth is something that other yoga studios and teachers also deal with right across New Zealand.

Yoga is not like buying a cup of coffee. It’s not buying a pair of pants or a beer. Yoga is about connection, union, community. The value that yoga creates for our society is huge – physically, emotionally and mentally.

So how do we create communities which value and support the teaching of yoga?

‘Cos right now, I don’t think we’re doing the best job, and it’s to our collective detriment.

Time to do something about it – and you can start by using the comment box below, sending me an email, letting me know in person… what do you think about all of this?

Whether you’re a teacher or a student… I’d really like to hear from you.

And here’s a chance to put some flow into action…

…use those social media buttons underneath to pass this along to other yoga students and teachers so they too can weigh in on the discussion.

Let’s get all of NZ’s yoga community talking 🙂

Read the follow-up article here: How much is a yoga class worth to you? Part II