You are here: Home / Yoga Articles / Awakening • Creating a More Beautiful World / Musings from the Mat / How I Found my Ground through Shiva Rea’s Taupo Immersion 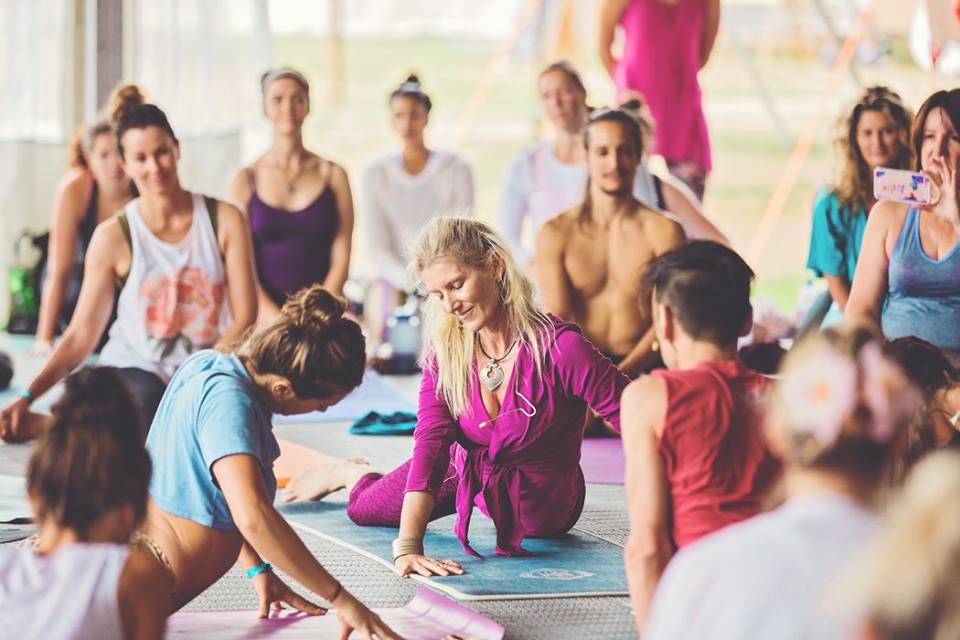 In February this year I spent five days at Wanderlust and then rolled straight into an Immersion with Shiva Rea.

Stepping back into training with Shiva was coming home for me. She is my teacher, as no one else is.

Yes, I have received good and useful teaching from other teachers like Peter Sanson, Pal Scrivener and Vincent Bolletta. Shiva’s experience mimics mine though. Her practice of yoga, which began in Ashtanga, is deeply intuitive. She can feel the natural arising of asana, mudra, kriya, pranayama and chanting as required.

This is my experience too. And being with Shiva validates my experience, while also providing context and form for it. Everything Shiva does is firmly rooted in lineage and the roots of yoga. Nothing is made up, haphazard or just for fun. The evolution of the practice is happening for a specific purpose.

For example, sun salutations as traditionally taught by Krishnamacharya and then his students like Pattabhi Jois were linear, on the frontal plane only, and stopped at Surya Namaskar A and B. In the seventeen or so years since Shiva has allowed the evolution of vinyasa to flow through her, she has documented forty different namaskars, including Chakra Namaskars, Rasa Namakars and Bhakti Namaskars.

The evolution of these namskars is not about creativity, although they are an expression of the divine creative. Rather they are a response to what is needed in the body.

I felt this deeply on the first first day when we dove in deep to a Muladhara Practice (root chakra). We began, as all Shiva’s classes do, with an opening movement meditation designed to activate the appropriate flow of vayu (wind – the five directions of prana within the body). As muladhara is connected to apana, the downward flow of prana, the movement we did with our arms emphasised the subtle pranic movement.

And this is why I love Shiva.

Everything that happens in one of Shiva’s classes springs from the subtle body. It’s about how you feel on the inside, how the energies are moving or not moving, and it all serves this.

After the opening movement meditation which establishes the bhava (feeling sense) of the practice and begins attuning students to the particular emphasis in the movements in prana, we moved on to a namskar. In a traditional class, this would mean sun salutation A and/or B. However, in Shiva’s class, we did Muladhara Mandala Namaskar. The movements themselves are simple. The emphasis is strong though.

While Shiva teaches vinyasa flow, there is no rush from one pose to the next, especially on the first time or few times through the namaskar. Through her use of language, metaphor, tone and music, Shiva calls us to deeply connect to and feel our roots.

I marvel at this shift as we move through the namaskar. I feel like my root chakra is coming alive as I notice it in relationship to my heels in particular, and in the way my legs move. I can feel muladhara becoming activated as the practice continues on through core cultivation and into wave one and two of the main body of the practice.

It’s like a dead spot on my spine suddenly has prana flowing through it. I can feel the connection between my tailbone and the back of my skull in a way I never have before. I notice in the malasana variations how I constantly use a perceived weakness to flee out of the intensity of the pose. Shiva doesn’t allow it though. She comes over and gently enhances (rather than adjusts) my posture, supporting me to stay where I need to stay.

As I drop in with her support, I feel something let go in my pelvis. My spine spontaneously extends and opens and I feel my heart expand.

Later, after showering, I practice my twerking in the mirror. I’ve been doing this since Prana when my dear friend Ra taught me how to twerk. Or rather, tried to teach me.

Move from your root chakra, not your abs!

But I couldn’t. My nervous system didn’t seem wired that way, and no matter how hard I tried, there was no free flow of energy down my spine and into my root which allowed me to twerk. So Ra gave me homework;

Whenever you’re naked in your bedroom, practice twerking in front of the mirror. Watch how your spine moves, or doesn’t move.

Normally I don’t much like homework… but this I could do! And I was fascinated by the way my spine was stuck. Maybe it was because of the fusion, but I had a sense the stuckness was more energetic than physical.

So when I got in front of the mirror after Shiva’s Muladhara class, I had a clearly established baseline I was moving from.

It had all changed. I could finally twerk – moving from my root, and letting the pulse flow up my spine from there, rather than moving from my solar plexus and trying to force the flow down.

Energetically, I had been freed. And even more interesting, I was fascinated by how this freedom in the root seemed to give my heart permission to expand open. It was like I felt deeply connected and rooted and so felt safe to open up.

There’s no doubt that my experiences at Wanderlust had flowed into this – the sense of finally being welcomed to this land, my sense of tribe, of family, of connectedness. Wanderlust had been about this relationship between our roots, our heart and our connection to All that Is through our third eye.

Now, Shiva’s retreat grounded this into my body in a very real way. No other yoga teacher has ever come close to this kind of teaching for me. This is how I experience yoga – as the subtle moving outward to the gross. I feel it as a spontaneous arising of movement according to what’s needed on any given day.

Yet this also means that sometimes I feel totally lost and adrift because it’s all free flow. Like water with no container. Energetically, I am naturally at home in svadisthana (second chakra) which is unbounded and free flowing creativity. It’s ruled by water. Yet without a strong container – root chakra – water dissipates and it’s power is lost.

Last time I did Shiva’s training, the strong container she provides was almost lost on me.

There was too much information for me to absorb and couldn’t comprehend everything she was offering. I came home feeling irritated and struggled to step back into teaching yoga. I knew the way Shiva was teaching was my organic way to teach as well, but I couldn’t find my way in intellectually and so let it all go.

It took me about three years to feel my way back into teaching yoga and figure out how I was doing it.

Now however is different.

Now I was ready for the strong intellectual, systemised container that Shiva provides for Prana Vinyasa.

The second time around, I understood her sequencing methodology with ease and saw how I had naturally migrated towards a simplified version of this over the last two years. I saw how I had been finding my own way, intuitively, to where she teaches from.

And it was a huge relief.

I don’t have to work everything out.

I don’t have to write out all the different namaskars as they come through me. Shiva’s already done it. I can draw on her large body of knowledge and apply her teaching methodology.

I can finally step fully into this lineage, knowing that it is where I belong, where I spring from, and where I am called to serve. I know I am up for it… I suspect back in 2010 I was afraid that I would never grasp all the complexities never mind be able to teach them!

When I was heading off to Shiva’s training in 2010, I was delayed by two days because I had the wrong visa for my passport. On the last night in Auckland, before I finally flew out, I was meditating before sleep. In that meditation, I saw my root chakra opening, like an eye that had been shut. The eyelid opened and instead of an eye, it was the yantra for muladhara (I didn’t know what it was at the time and had to go hunting to find it).

It’s taken me another five or so years to step into that opening of muladhara. And, like the way life constantly spirals around, no doubt there will be other levels and layers that continue to open.

But this time, leaving Shiva’s training, instead of feeling irritated that I won’t be able to honour this lineage and deliver what Shiva does, I feel a profound sense of groundedness and peace.

I know where I am.

I know how I’m teaching.

I know who supports me.

I know where I’m moving from.