You are here: Home / Yoga Articles / Awakening • Creating a More Beautiful World / Musings from the Mat / How George FM Blue Skies Gave My Radiant Self an Opportunity to Shine 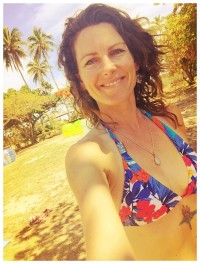 Learning how to shine, wherever, however.

A couple of months ago, I went to George FM’s Blue Skies three-day music festival in Fiji as part of Yoga Rhythms. I wrote about that experience in this article: How George FM Blue Skies Challenged my Judging, Critical Self. This is the follow-up.

Once I got over my angst and judgment about spending three days in the whirlwind of a mainstream booze-fest dance party, I got on to the serious business of being joyful.

The first time at Blue Skies Fiji that someone asked me what I did, I mumbled something about teaching yoga, writing, and presenting. Then I kicked myself for a lost opportunity.

The second time someone asked me what I did, I responded;

Oh, I live a life of outrageous joy.

The look on their face was priceless and that one line opened up an awesome conversation.

And so it was so be for the rest of the trip. I constantly challenged myself to be as real and open and ballsy as I could in conversations. The results were gold.

On the boat on the way over to Mana Resort, I got talking to Dennis, who worked in IT. He was there with a handful of his colleagues, stoked to enjoy a big holiday out from a full-on job. Dennis was incredulous when he realised that not only was I not drinking on the boat, but that I wasn’t going to be drinking on the entire trip.

But how are you going to survive three days without drinking?

And I use that word deliberately. It almost felt like Dennis was begging me to explain… or at the least, to start drinking right there and then.

Dennis’s question highlighted the difference between our baseline realities. My baseline reality is generally so relaxed and joyous that to drink alcohol is to bring me DOWN. It reduces my level of fun and enjoyment.

Whereas for Dennis, and most of the other people on the trip, drinking alcohol was a way of opening up and letting out the fun and enjoyment.

They needed to drink to be where I already was naturally.

Have a drink! They urged. It’s fun!

Only for me, being sober was way more fun. I began to see how far I’ve come in the last few years.

Every time Dennis and I crossed paths over the next few days he would do a double-take as if to check in on my non-drinking status and marvel at the joy and fun I was having.

Observing these interactions I realised that I am no longer bound by my mind and my fears the way I once was, and it’s a glorious thing.

I remembered how much crazy, awesome fun I used to have when I was drinking with all my mates too. It was wild, and a total blast. But I’m not there anymore. And it’s not that here is any better than there, it’s just different.

Cheaper for one – some of the alcohol bills at Blue Skies for the three days totalled in excess for $4000 for one person… Plus I was never hungover and I was always full of energy and fun, even at 7am in the morning.

There were other conversations I had over the course of the trip that highlighted the importance of radiating whenever you can.

I dropped into ‘serious’ conversations with at least four people which all had the same general pattern – they ended up sharing deeply about some situation that they were struggling with at the time.

I listened, deeply. I watched as each of them felt heard and seen, and I felt the emotion rise in them. It wasn’t always externally expressed, but I felt it, and they felt it. Each of them then apologised for ‘bringing me down’. Each time, I shook my head and responded in the same way.

“You’re not bringing me down. It’s an honour to feel your pain with you. To be with you in this moment. This is the glory of life, right now. This pain as well.”

And I meant it.

Nothing meant more to me on that trip than the sharing of a heart-space with each of these four people. This is real connection, real openness, real joy.

Yes, each of them was sharing heart-ache, but in the sharing of their heart-ache, they also shared their hearts with me. Nothing is more precious than that.

I also realised in this moment that through going deeply into my own pain and suffering, I have cultivated an ability to sit with other people’s pain. And that this is a gift. I can hold the space, allowing them to feel and be just as they are.

In this way, each of these four people also gave me a gift. I felt useful and needed in these moments, because I had something valuable to give – my presence.

These moments reminded me that we never know how we are going to impact other people, or what gift we might bring to a situation. If I had stayed closed down and judgemental at Blue Skies, removing myself as much as possible from the party, I could never have had these conversations. I can’t know either how everybody I spoke to was impacted by my presence, not just those four people.

It’s so easy to focus on what we’re getting from a situation, and I suspect that has always been my default way of being.

What’s in this for me? What am I going to get out of this?

But I’m learning now to soften and relax and instead focus on just being in the situation. From that space of relaxation and being, I’m learning how to see where I can give, and what I can offer.

We left Mana Island, which hosted Blue Skies Fiji, on Wednesday morning at 5am. It was a very different boat ride from the one over. Most people had partied into the wee hours of Tuesday night, some all the way through.

There were still tunes – sweet, lyrical offerings from Murray Sweetpants who’d had the foresight to bring his own speakers. But the people were mostly passed out or hungover, catching an hour or two sleep before the 9:45am flight.

I was awake, and took the opportunity to practice some yoga, and finish a few conversations. I watched the sunrise, danced to a few tracks, alone and with Murray’s partner Jodi.

No longer did I feel separate or alone or different to everyone else on the boat.

I’d found myself within.

I’d found that connection to all that is, and I was content, being me, as I am.