You are here: Home / Yoga Articles / Awakening • Creating a More Beautiful World / Musings from the Mat / How George FM Blue Skies Challenged my Judging, Critical Self 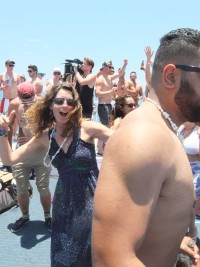 I’ve been dying to go to a pacific island for a few years now, but just haven’t had the available cash to pay for a holiday.

So when Rire, the other half of Yoga Rhythms, called me to say she’d landed us a gig in Fiji, all expenses paid, I was thrilled. And I didn’t ask too many questions.

A few months later, I saw the flight details – leaving Auckland at 2am on Sunday morning and flying back at 9:45am on Wednesday morning. Barely three nights there and two gigs to do. There wasn’t going to be much down time – or sleep!

This is that moment when something that seems like an awesome idea can start to seem rather crazy. But hey! It was Fiji! All expenses paid! Suck it up! I’d napped for three hours on Saturday afternoon in preparation plus done two hours of Yoga Nidra over the day… surely I could cope with a night’s lost sleep.

There were a couple hundred of other Blue Sky partygoers at the airport that night, and while Rire and I slunk off to the gate to snooze while waiting for the boarding call, many of them fired on through the night, cranking up the tunes on iPhones and speakers to keep the party going.

At 6am when we were finally getting ready to board, a stag party – resplendent in lycra tights and underpants – entertained the tired crowd with cross-fit movements and calls for yoga.

Now I’m beginning to seriously wonder… what the hell have I got myself into? Who are all these crazy people?

It was to get worse before it got better. The flight was ok, although a couple of drunk and possible high folk wandered up and down the isles entertaining everyone in their wake – or annoying, depending on your frame of reference.

Post-flight, we piled on to buses which drove us to the port where a boat plus another 100 or so other Blue Sky partygoers were waiting for us. (They had been on an earlier flight). They commiserated with our delayed flight experience as everyone piled onto the boat for a two hour ride to Mana Island, where we were to be stationed for the next three days,

By now it’s something like 11am, it’s stinking hot, the DJs are cranking the tunes and the bar is open.

I ducked down to the cramped women’s toilets to do a quick change into something more suitable for pacific climes, pushing past women reapplying layers of make-up and doing quick changes of their own into bikinis and very little else. I felt positively matronly in my calf-length dress and – paradoxically – naked on my face.

Turns out George FM Blue Skies is a mid-20s to 30s mainstream crowd of serious party goers who have likely saved up all year for this one big blow-out holiday.

It was nothing like the usual Yoga Rhythms audience of consciousness-raising, yoga and meditation practicing, spiritual growth-focused party-goers I was used to.

And by now, my inner critic/judge was in serious over drive.

I was over-tired, over-whelmed, uncomfortable and totally out of my comfort zone. It was madness inside the boat, with the air-conditioning cranked, bags everywhere, and a crush at the bar (which ran out of booze  before we docked). Outside on the deck was even worse. The tunes were pumping loud and there were people dancing and jiggling and drinking everywhere.

Fortunately, my VIP bracelet got me upstairs to the chilled VIP area where there was space to sit, talk and relax. I could take stock of where I was and what the hell was going on.

In that moment, I realised I had a choice. I could keep on heading down this internal road, judging everyone around me and despairing at the situation I found myself in…

Or I could drop all the judgement and all my desires for the situation and the people to be different and just fully accept where I was and who I was with and enjoy every last moment of it for what it was.

You know what I did, of course.

There really wasn’t a choice.

Once you bring awareness into a situation and the filter you’re putting on it, the choice becomes choiceless as such.

And I accepted everything around me.

I saw how that is still in me now – that I still do that now, despite all the yoga and meditation and personal growth etc. How am not nearly as different from any of the people around me, much as I would like to think.

I saw the humanness in everyone around me, and in myself. From that place, I was able to relax and be my shining self, connecting to the people around me with ease. All my internal angst melted away.

I soaked up the marvel of being on a beautiful boat, with beautiful tunes, in the middle of the Pacific, on my way to a Pacific Island.

The mainstream drinking culture wasn’t a situation I would have chosen to put myself in any more. Not my scene, yo! But there I was. And because I was there, I wanted to be FULLY there.

Once upon a time I wouldn’t have been able to make that shift. I would have gone completely into victim mode, thrown my toys out of the sandpit and refused to play, because I wasn’t where I wanted to be, getting what I wanted to get. I can recall numerous occasions where I did this.

This time, I caught myself, saw the separation I was creating, let it go, and instead of focusing on what I wanted to get, I focused on what it was I could give.

I totally switched it all around.

Who I am is not dependent on my circumstances.

I don’t need to be propped up by other like-minded people in order to be who I am.

I don’t need to be seen, or understood, or valued, or appreciated to be me.

I can just be my radiant, connected, joyous, glorious self by choosing to be.

This is a huge step.

And I can thank George FM Blue Skies for giving me an opportunity to own this shift, once and for all.

Will I be back next year? Possibly… quite possibly… because the trip just got better and better.