You are here: Home / Yoga Articles / Teaching • The Business of Yoga / Teacher Interviews / How Bikram Yoga Evolved into Evolation Yoga with Mark Drost and Zefea Samson 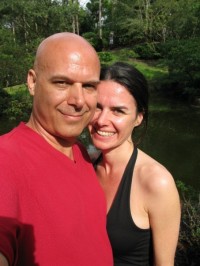 Mark Drost was once a Bikram Senior Teacher, completely immersed in the Bikram World.

Like so many though, there were aspects of the Bikram Culture that bugged him. He could see the yoga was run on fear and control and it didn’t sit well with him.

After six years in the inner circle, and after meeting his wife Zefea Samson, Mark left.

He and Zefea took everything they had learned during their time with Bikram, and prior, and used it to create Evolation Yoga.

They based it on Bikram’s 26 postures sequence because they believed in the power of that yoga to heal and transform, but they also introduced other elements they though were missing – like meditation.

The other key element they’ve introduced to their yoga is an emphasis on flexibility and change – the ability to evolve:

And as the needs of our students evolve, so will we. We’re open to change. In fact, it’s our goal. If it’s transformation we seek, we won’t find it by staying static.

Bikram Choudhury wasn’t so happy though. In 2011 he sued Evolation Yoga and two other yoga studios for copyright infringement. The other two studios ended up settling out of court, but Evolation defended themselves all the way.

In the end, the judge ruled Choudhury’s copyrights cover only his books and videos describing his system, not the actual performance of the moves themselves.  The ruling confirmed that Bikram Choudhury can’t prevent other studios from offering “hot yoga” classes using the same 26-posture sequence used in Bikram classes.

The fight’s not over though. Bikram has appealed the judge’s ruling but Mark and Zefea are confident of the copyright law and are determined to see this through, once and for all.

In the meantime, Mark and Zefea are also busy running teacher trainings around the world, and building a collective of other teachers to help with those trainings.

Not only do they focus on training teachers, but they’re also passionate about providing support for opening yoga studios. Not the kind of rigid demands that Bikram would make on affiliate studios, but:

… a network of instructors and studio owners where ideas, talent, expertise can be shared to fuel everyone’s growth.

I spoke to Mark and Zefea and they spoke candidly about their time with Bikram, the inspiration for Evolation, the need for evolution in yoga, the lawsuits and how self-inquiry is the corner-stone of any teacher training.

Mark and Zefea from Evolation Yoga on
Bikram Choudhury, Lawsuits and the Evolution of Yoga

Evolation was founded by Mark Drost and Zefea Samson. Mark spent 6 years as a senior member of the Bikram training staff. Prior to his time with the Bikram organisation he practiced and studied in the Yogananda / Ghosh lineage for over 20 years. Zefea has been on the yoga path since the age of 5 and competed in the top 10 at the International Yoga Asana championships for 4 years. They created evolation to provide a comprehensive inclusive and intimate training experience for students who wanted to study the hot yoga Primary Series, without the associated attachments.

Evolation has grown into a worldwide collective of teachers and studios working together to help develop a unified global yoga community; with studios in America, S. America and Australia – and affiliate studios in Europe and Asia.