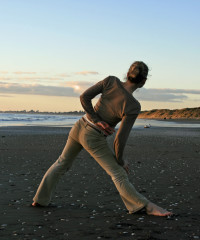 Everything is process, and sometimes we need to turn away from life and into ourselves.

I felt it when my alarm went off on Monday morning a few weeks back.

I was not ready to get out of bed. Yes, I was tired, after a big weekend on the road with my son, but this not wanting to rise was deeper than that.

I did rise though, and like every morning for the last 154 days, I sat and did my Tantra Meditation.

The morning unfolded as it always does, getting my son ready for school and myself ready for a day of work but there was a tugging within. A part of me that does not want to be here. That wants to retreat.

This is ok. I’ve learned, in time, if not to welcome this state of being, at least to acknowledge it.

Hello depression, nice to see you, why have you come this time? What emotions are ready to rise?

I was kind to myself as I ploughed into my lengthy to-do list.

Later, I climbed back into bed and did an hour of Yoga Nidra, drifting off into the space between worlds, before leaping up for a scheduled Skype interview.

This is how I both honour where I am at, but also honour my commitments in the world. I am grateful for a work like that allows flexibility like this. This in intentional though – over the last decade, I’ve deliberately chosen jobs and ways of working that have allowed me the time and space necessary to deal with my inner world. My inner world has taken precedence over everything else because there is nothing more important than being well – mentally, emotionally and physically.

Now, there’s less and less times when my inner world requires that kind of space and nurturing. Mostly, I feel amazing and can charge on through with multiple balls in the air.

This is what makes it harder in some ways when depression slips back in. The contrast is stronger, like night falling suddenly at the height of the day, rather than sliding in at dusk.

Tuesday I watched a video of the TPPA march in Auckland and I cried. It was the first time in this episode of depression that the tears surfaced. I watched myself cry and I wondered why. I flicked away from the march and over to an article. The tears dried up. Back to the march. The tears gushed.

Wow – this video of people coming together and marching down an Auckland street was having a visceral effect on me. Fascinating!

I’ve been immersing myself lately in works about the brain, the nervous system and trauma.

Peter Levine in his book Healing Trauma explains how when we experience trauma that is not fully expressed, our lives will play out that pattern over and over again until we are able to fully express and release the original trauma.

He tells a story of a Vietnam vet that would inexplicably go and rob a dairy on July 5th every year (when he wasn’t in jail for the previous robbery). Eventually, the vet realised that July 5th was the day when his platoon came under serious fire and everyone was killed, including his best buddy in his arms.

His system was playing out the drama, on the same day, over and over, until he was able to become conscious of what was happening and release the trauma he was carrying.

Which begs the question, what trauma am I carrying from arriving somewhere that seeks release every time I move?

Because over the past two years, I’ve tracked the depression in my life and it’s always triggered by moving. A week or two after I get into a new house – bam! Hello depression.

Or maybe it’s not that pattern this time. Maybe it’s this one. You see, this weekend, another instance of psychological patterns replaying occurred.

I was spending time with a friend over the weekend, on Friday night and then at a party on Saturday. On Friday I noticed that I was feeling very vulnerable and it made me feel uncomfortable. After everyone had gone to bed, I stayed up and did some Yin yoga and meditated, staying with the feelings.

On Saturday night, at the party, the inadvertent actions of my friend triggered feelings of rejection. I felt like I’d been emotionally cut off. As I noticed the feelings in the midst of the party, I realised that this was the constant dynamic I had lived with for over three years with one ex-partner.

He would shower me with love and connection and awesomeness, and then withdraw and cut me off and reject me.

I’d forgotten how awful it was to live in that dynamic, and how it triggered insecurity and uncertainty in me.

As I stayed with the feelings, I realised this pattern was older than that relationship. This was the dynamic I also experienced with my Canadian fiance when we went to a music festival in August 2004. We were meant to be there together – we were there together – however he withdrew from me, and rejected me, and didn’t communicate what he was going through. That experience, plus LSD, triggered my first episode of psychosis.

Standing in the party, which was a ‘mini-festival’ organised by Earth-Beat, I realised that this event in August 2004 happened on the new moon, just as this festival in 2015 was happening on the new moon.

It was a perfect parallel – only then I wasn’t able to feel my emotions safely and I shut down, withdrawing into my mind. This time, I was able to feel them safely and stay with the process.

It wasn’t easy, being in a public space with a swirl of intensity claiming my inner space.

But I found a spot to sit and chill out, meditating while the party danced on around me. Later, after dinner and performance, there was kirtan from Premratna and others. I sat at the back of the room in half lotus, eyes closed, and meditated on my emotional state while allowing the sound and vibrations to wash over me.

When I stood up to dance, as the kirtan gave way to late-night DJs, I felt a cracking sensation in my heart space and a wave of bliss ride up my spine. Did I finally feel into and face the depth of emotions I couldn’t deal with in 2004? I’m not sure. Perhaps I am closer.

Or perhaps it finally broke open all that I didn’t feel then, and that’s what I’m feeling now. Because boy I’ve been feeling it, all week long.

It’s now Thursday and I’ve been deep in it for four days. The tears broke through on the Tuesday on the viewing of the TPPA march. I sobbed my way through making dinner. Through making breakfast on Wednesday. Through listening to Matt Kahn curled up in bed on Wednesday night.

This sobbing is gut-wrenching, yet also strangely satisfying. Sometimes there’s waves of feeling that accompany it like loss or heartache, but often it’s almost like dry heaves – all of the bodily somatic motions with none of the emotion behind it.

What’s apparent to me is the impact on my nervous system through this process. I’m in a state of stress, irritability and anger. It’s difficult to function, to parent, to be patient, to be anything than other with the process.

It’s such a strong contrast to my default state of being, which is now relaxed, light-hearted, joyous and present. Yet once-upon-a-time, I was in this awful state 24/7. For months at a time. I wonder at that – how I made it through.

I write about this experience now because I know that I am not alone. That other people experience emotional waves in their lives.

These waves in my life feel like a birthing.

It’s feels like the body’s way to process deep, held emotions and realign itself to a higher vibration.

Sometimes I feel like I’m sobbing for all of my ancestors past, and for all of humanity past and future.

Maybe this is why I cry when I watched the TPPA March, or read this article on Burning Man and the Pope calling for ecological conversion.

Yeah. it sucks and it’s tough.

But hey, that’s life. Tomorrow will be different.

I’ve been through this enough times to know that. And I’m ok. Under it all, I am ok.

This particular experience lasted about four days. I sobbed out deep layers of old stuff. And then I was clear and free again. Back in my now-default state of lightness with a greater understanding of myself and a greater sense of freedom. So grateful.

Matt Kahn: Everything is Here to Help You