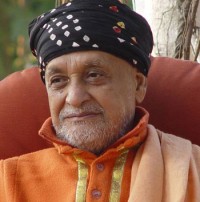 Swami Satyananda, who left this life on December 5th, 2009

Being present in the Maha Samadhi (conscious leaving of the body) of a being like Paramahansa Satyananda is a remarkable and indescribable experience but will I try to share it here.

Swami Satyananda in life was tireless in his transformation through Seva, service and work to share and help those who needed.

His devotion and commitment to the Divine is so powerful that even after being liberated from the wheel of births and deaths and now in his home with God, he said several times during his lifetime that he will reincarnate many times as needed until no one fell pain or suffering.

After founding and establishing the first University of Yoga in the world recognized by a government, the Bihar School of Yoga, Swami Satyananda received in meditation the continuity of a project even more grandiose.

The social and spiritual work that he started 20 years ago in the rural and very poor state of Rikhia helps a community of children, young, adults and elderly.

A staggering number of 3,000 families receive whole opportunity studies, home, work and dignity through the Rikhiapeeth Ashram service.This ideal realized in life by Swami Satyananda is his legacy to all of us.

On December 5, 2009 I was in Rikhiapeeth to attend a Kriya Yoga Tattwa Sudhi course, the Yagnas rituals were over and only residents and a few people remained in the Ashram. It was a peaceful atmosphere despite the movement of the daily activities of that great and efficient hive, the result of a life of work and dedication by Swami Satyananda.

On that December night, I awakened early and looked at a clock, it was midnight. There was no no explanation for my awakening, and something similar happened with many in the Ashram. I only realized that something had happened that night when I was in the Yagna Shala. The class hadn’t started and the Stotras played intermittently.

Then an Indian colleague informed me of the Paramahansa Maha Samadhi (Swami Satyananda’s conscious decision to leave his body the night before). For a while I was in disbelief not understanding, then a sadness flooded over me and then, like the rainbow on a rainy day, a greater clarity of what I might expect over me. I realized that our Paramahansa gave us all love and teachings and now he has his own evolution to continue, now as a being of light, like a star.

We were all in there for long time. When I got out and looked at the Ashram´s trees and gardens, there was no wind, no breeze, silence permeated the sounds. The nature stiilness in Mouna revered and received that great man, his father, his brother, his Guru, Swami Satyananda Saraswati.

I went to the Christi Kutir and there alone, listening to the birds’ kirtans, I could feel quietness. While wrapped in a great wave of peace I felt a strong presence. An energy like a large hand landed on my head. My heart received Paramahansaji blessing me, blessing me…

Later in that same day, we viewed the Guruji´s body. We entered in procession; the atmosphere inside the Ganesha Kutir was palpable and serene. We received the grace of the Guru, his Darshan.

Swami Satyananda was sitting in the lotus posture, in the same way when he reached the Maha Samadhi chanting the Pranava OM. By tradition one that achieves this receives liberation from the wheel of birth and death, and is buried because there is no karma to be burned. They remain in the same position they were at the time of the great liberation.

Swami Niranja and Swami Satsangi, disciples, were at the feet with their eyes on their eternal Guru. The strength of Light and Love of his great soul is swamped throught out the Ashram, invaded our hearts and expanding in all directions where are his disciples, friends, places that reflect their work and everyone and everything that is inspired by him! Experiencing something like this magnitude is remarkable, know by experience that this is possible and very real!

Now that I’m in the kitchen of my house at 4:30am in Sao Paulo, Brazil in the morning, a day after the arrival of my journey to India, I realize that I do not have the scope of how this experience affected me. Even now it’s impossible to cover the effects that will come about because of Satyananda Yoga, in the region of Rikhia  and for all mankind.

The truth as I know it as fact is that I´m strengthened in faith and understanding of the difficulties of mine and other human beings. I do not know what will come, but I intuit that it will be as great as the immanent presence of this simple and faithful man, Swami Satyananda Saraswati.

Who might there be who radiates as a channel a little bit Maha Samadhi´s vibration , the energy from this eternal disciple, pure soul like a child, like the Rikhiapeeth batuks whom he plans to reincarnate!

And this is a great blessing and teaching, being open to receive and send the Grace of the Guru and all beings who illuminate the darkness! 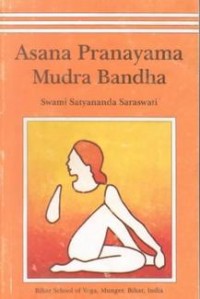 One of Swami Satyananda's many books

Swami Satyananda has written many, many books in his lifetime, but for an excellent overview and some indepth insight into yoga, nothing beats this one.

It’s probably not recommended for the total beginner, but if you’ve been going to class for awhile and feel ready to find out more, this is a wonderful place to start.