Up and down the country, form Auckland down to Dunedin, yoga practitioners gathered together on Sunday September 19th to do a practice for peace and raise money for the Yoga in Prisons Trust.

The biggest Global Mala events were organised in Wellington, third year running, and in Dunedin, the inaugural event. Both braved the changeable weather conditions to take the yoga outside and to the sun directly.

Down in Dunedin, there were snow storms threatening and an icy cold weather but some fifty hardy souls turned up to offer their energy to the sun, and to peace.

Spearheaded by Emma Furness, owner of the Dunedin Yoga Studio, the event was embraced by the whole community. Even the local Bikram studio got in on the action, despite not usually practicing sun salutations. Studio owner Donna Wikio corralled some of her teachers to come along, and donated all the money raised via mat hire in the previous month, a total of $150. It was a beautiful show of unity and connection from the Dunedin Bikram Studio that underscored the ideals of the day.

Yoga teacher and cafe owner Gemma Carroll had kept a donation box on the counter of her business for the month prior, which also helped boost the takings in Dunedin. Channel 9 representative and photographer Dee Carran took photos and has made them available for sale, donating $5 of the $25 cost towards the Yoga in Prisons Trust. The final donation total in Dunedin will be close to $1000. 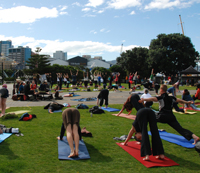 Wellington had about ninety people on mats and another sixty around the outisde, raising $800. About $600 of that has to go toward costs for putting on the event, and organiser Melissa Billington is encouraging people who weren’t able to donate on the day to go to the Yoga in Prisons Trust website to donate directly.

Before we began our 108 rounds of the Gayatri Mantra there was a discourse on where the mantra had come from, it’s various translations, followed by the most difficult part – the correct pronunciation.

We started each round of the Gayatri Mantra with the primordial sound Om (pronounced more like AUM) and focused on allowing the sound to vibrate slowly from the base or root chakra upwards and out through the crown chakra.

We had a group of 10 women attend the workshop and raised $50 for The Yoga in Prisons Trust.

A big Thank You to my friend Nan who shared her in depth knowledge with us and is an expert in Sanskrit Pronunciation.

At Srinivasa Yoga House we decided to chant and contribute to the event on an energetic level.

We had about 14 people attend and we did a mamoth task of akhanda chanting of 2 malas (216 rounds) of Maha Mantra together which in the end only took an hour!

Up in Auckland Satyananda Yoga teacher Devashakti gathered a small group at her house and raised $50 for the Trust:

We had a lovely evening here at home last night – Global Mala 108 x MMM chanting, a DVD Love & the Art of Giving, Martin cooked a fabulous Vasudeva-style vegetarian feast and much spiritual discussion & inspiration was had. 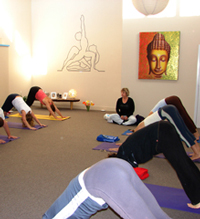 Brand new yoga studio in Havelock North, Breathe, got involved, here’s what studio owners Doris and Urs had to say:

We had eleven participants and raised $114. We did 108 sun salutations with three breaths in downdog, and 12 heart sutras (chanting).

The energy levels in our new studio breathe were amazing during the ritual.

We moved in one movement, one breath. inhale, exhale….. so beautiful!

Next time we need drummers who support our group effort!

And finally Anahata Yoga Retreat in Nelson also held a gathering for Global Mala with just under twenty people attending and the auspicious amount of $108 being raised for the Yoga in Prison Trust. This from Samata:

The residents, guests and neighbours of Anahata Retreat came together at 5pm to offer our support to the UN’s International Day of Peace and to raise money for the Yoga in Prison Trust. We performed an ancient and traditional fire ceremony called havan.

Havans are used to invoke and connect with nature and the cosmic energies. Each of the five elements are symbolically represented.

With our energies directed towards peace, we chanted 108 rounds of the Gayatri Mantra for higher learning and intuition. At the end of each round an offering was made to the fire with the mantra “Swaha”. The Gayatri Mantra holds the light, power and knowledge of the rising sun.

We spent one hour chanting sacred mantras and making offerings to the fire, then we chanted Kirtan for another hour and ended with a vegetarian shared meal. It was a wonder event to be a part of and it is on our calendar for next year.

Big thanks to everyone right across New Zealand who contributed in some way to this event – by helping organise, by showing up and taking part, by donating money. Your efforts are much appreciated, and give us something wonderful to build on for next year.

Final words go to Portobello yoga teacher Kitty Brown who led the intention and karakia down here in Dunedin. Here’s what she had to say, first, a quote she used from Paramhansa Yogananda:

It is possible that the human race, and its works may in time disappear.

The sun does not falter from its course, it wars not with the planets, but retires in due time to allow the stars their little sway.

So what? Avails our armoured fist?

The law of the universe cannot be changed. And man would do well to align himself with it-now.

Not cruelty. But goodwill and love will build the universal sinews.

A humanity at peace can know the endless joy of victory, far sweeter than any won on the soil of blood.

To know the high ideal of Peace. May Yoga spread in time to every land.

And in Kitty’s own words:

Giver of Love and Peace

Be with us in this place and with our loved ones,

Please grant us your guidance today

And all the days of our lives