You are here: Home / Yoga Articles / Starting • The Foundations of Yoga / Going to Class / Getting Touchy Feely with Maty Ezraty in the Yoga Room 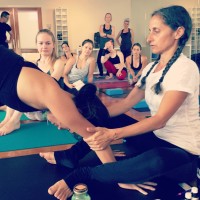 Maty adjusting a student at the Melbourne workshop

One of my favorite teachers, Seane Corn, credits Maty Ezraty as one of the single most important influences in her life. Maty encouraged Seane to become a teacher even when she didn’t want to.

Maty is also well known as the force behind the popular YogaWorks brand, which she opened in 1987 with Chuck Miller in Santa Monica. In 1990 Maty created the world renowned YogaWorks Teacher Training Program and teachers like Kathryn Budig, Shiva Rea and Annie Carpenter have all completed this program on their way to become powerhouses in the industry today.

So when Maty decided to come to Melbourne off the back of her workshops at Wanderlust in New Zealand I knew I had to be there.

The first workshop was ‘The Shoulder Girdle Mantra’ and we started with something simple – child’s pose. Maty doesn’t teach child’s pose for the sake of resting though, but instead as a tool to enliven the outer arm muscles. For most of us in child’s pose, this area might be know affectionately as ‘Tuckshop Lady Arms’ – kind of hanging about and not really doing much.

So there we are, attempting to tighten an area that refuses to listen, at the same time as relaxing the trapezius, which loves to gather in tight around the back of the neck anytime you attempt to tighten the outer arm.

Maty is coming around, giving adjustments, and – when finding a good example to learn something from – asks us all to gather around.

There is fierceness to Maty, which makes you pay attention, but she also often makes light of the situation by laughing at herself and the intensity she offers.

During this particular adjustment, she grabbed the student’s ponytail and picked her head up via it.

She didn’t ‘pull’ the student’s hair, however, more by holding this area of the back of the head, she modeled for the student where to energetically pull from in the pose.  However, the gasp of horror that waved through the class was unmissable. Hmmm. 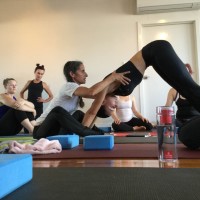 Maty has us in shapes for so long – squeeze this, lengthen that, breath life into this part create more space – that the room got pretty steamy and all kinds of internal frustrations were starting to bang about.

Then the next adjustment generated an interesting response from both students and Maty.

We were practicing Cobra, working at relaxing our buttock muscles, spreading our back inner thighs, and imagining a heavy elephant was weighing down our sit bones whilst we grew the ribcage up and forward.

To illustrate her point, Maty asked for a volunteer, and then went about adjusting this student.

Which meant adjusting under the buttock crease to encourage a spreading and a light pat on the buttock muscles to remind them to relax.

Whilst this occurred, there was some muttering and giggling.

Maty addressed this in the group straight away.

Eyes darted around and no one had the courage to voice their surprise at what was unfolding. Maty picked up on what was going on and said with surprise;

‘You guys seem to have problems with adjusting the body. In my training, with Patthabi Jois, we were adjusted. There wasn’t an intention behind it, our bodies were adjusted’.

We got it, and we continued on with the observation, soaking up as much of Maty’s wisdom as six hours in her company could offer.

On leaving the workshops that weekend, Maty’s comments got me thinking.

My sense was that under the guidance of someone like Maty, with clear intentions and decades of experience, there was no question that I felt confident in her adjustments as being appropriate and necessary to communicate the teachings.

Yet, in another scenario – say with a teacher I had only just met, or didn’t have as much respect for, or maybe they were male and I felt attracted to them, which could cause a misinterpretation on my behalf from the adjustment – those kind of adjustments would make me uncomfortable. Probably to the point of asking that teacher to not adjust me in that way.

As I pondered, I wondered how much this viewpoint has been shaped by the numerous ‘sex scandals’ that have spilled out into the media from the yoga community.  Admittedly, I have only come across scandals that involve male teachers. These teachers, many of them senior and well known, have taken advantage of a student’s adulation and vulnerability.  This has resulted in confusion when it comes to the experience of touch and adjustment within the yoga room.

Was it possible that what I witnessed in Maty’s workshop was the result of suspicion that has infiltrated our consciousness?

A moment where as students we were stuck in a dream where something we read in the past was affecting our ability to be present with what was happening in front of us, in an unbiased way?

Or has the yoga community become more sensitive around the ‘should’ and ‘shouldn’t’ of yoga adjustment, to the point where we reject the idea of someone being able to show us with their hands how the body might be able to awaken in a new way, without misinterpretation?

We might say ‘YES’ of course we are more sensitive to this style of adjustment!

Yet why then are we still okay with the variety of massages that we enjoy and undertake?

It seems that it is only a preparation of the mind – that when I go for the massage service, I expect this kind of body touch to happen. Yet when I go to yoga class, I don’t expect such intimate touch. Is this an unveiling of how conditioned we are, and how challenging it is to go beyond the conditioning to a new viewpoint?

In the scenario that unfolded with Maty, it was obvious that her intention was pure, yet there was still discomfort within the room that could be observed.

Is this the moment that as yoga students we observe our experience of becoming uncomfortable and begin the process of unraveling it from within? Rather then instantly sniggering or rejecting the environment, which only results in a strengthening of our justification of why we have permission to believe the things, we do?

Being amongst yoga teachers, one would hope that this was a natural process to all of our reactivity – taking our yoga off the mat, not just when we are in an uncomfortable pose and being asked to ‘breathe into it’.

It is profound how much learning an experienced teacher has to offer us, which goes way beyond asana.

Way beyond engage this; strengthen that, bones, muscles and joint movements or lack of.

We can literally soak up the wisdom that lives in the cells of these teachers, so that just being in their presence can begin to lessen the personality traits, beliefs and opinions we hold so strongly. The identity we cling to so confidently and use to engage or reject experiences unfolding. 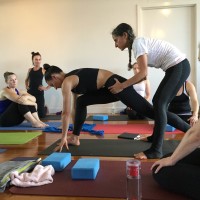 Maty working with a student in lunge.

In the case of Maty Ezraty, this woman can place her hands on me all she needs.

Her touch brings me to reconciliation with the areas within my physical body and psyche that are incongruent, and I have full confidence I will come out the other side with a little more realization then I first went in with.

However I might not be so comfortable with other teachers and this style of adjustment.

It takes many years to be able to offer adjustments to a student’s practice without our ulterior motive getting in the way, sometimes this motive simply being to prove that we are right and know our stuff. It will definitely be a case-by-case scenario, whether I am the teacher or the student, to discern where my motives or reactions arise.

Ultimately, if you do feel uncomfortable about adjustments in the yoga studio, make sure to have a conversation with your teacher about it after class. 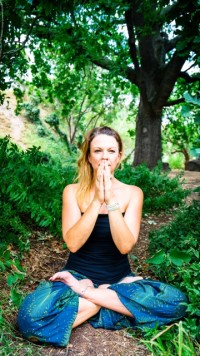 Michelle Jayne is a Senior Yoga Teacher in the Melbourne Yoga community with 10yrs of teaching experience.

Michelle recently did an immersion with Shiva Rea, and credits Duncan Peak, Ana Forrest and Seane Corn as her primary influences in training. She has also completed a Diploma in Counseling and Graduate Certificate in Yoga Therapy, incorporating this training into her programs.