You are here: Home / Yoga Articles / Starting • The Foundations of Yoga / Reviews / DVD Review: Bhakti – The Path of Love 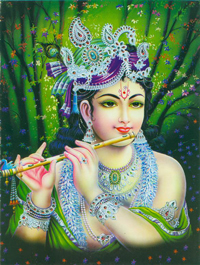 Beautiful Krishna, an aspect of the Divine

Win your own copy of Swami Ji’s Bhakti – The Path of Love. See the end of this article for details.

I’ve always considered myself a bhakti yogini – 4 of my 5 tattoos are overt reminders to myself of my relationships with the Divine.

Yet it wasn’t a topic covered by any of my trainings or workshops.  Bhakti Yoga is one of the major paths of yoga, alongside Hatha Yoga, yet very little of this particular approach is shared in the West.

So  I was rightly chuffed to be assigned Swami Govindananda’s DVD set Bhakti – The Path of Love to review.

Bhakti is a devotional stream of yoga that seeks yoga, as union, through relationship with the Divine.

Now, I use the term Divine, and one of my teachers would say ‘the God of your understanding’ and we could carry on coming up with more vague or neutral phrases, but for this lecture series it is clearly and unequivocally Krishna to whom we are seeking to relate.

There is lots of discussion in this DVD set of why we’d particularly find it beneficial to relate to Krishna rather than another form of God and this forms a wonderful background to the theory of how we’d devote ourselves.

It also offers great opportunities for the ancient learning technique of storytelling to come to the forefront of the lectures – making these much more engaging to play than if they were solely a talking head.

To those who are constantly devoted and worship Me with love, I give the understanding by which they can come to Me. ~ Bhagavad Gita 10.10

Each of the lectures begins with about 5 minutes of a slow, lovely chant. Swami Ji (on tour in New Zealand in April – June) has an easy, pleasantly accented speaking voice and sings in a steady and warm fashion. I didn’t know what he was chanting, but the overall feeling of love and dedication was clear.

Beginning a yoga class with chanting is standard fare.  Starting a lecture with chanting was simply wonderful. It served as a heads-up that this is a wonderfully well-rounded series of talks. Yes, the philosophy is there, but so are less mental, more emotional invitations into the topic.

There are Sanskrit terms and verses throughout all the discs, but you aren’t asked to memorize them or know them, just to hear them and attend to the information given in English.  It was a great way to relax in the midst of the talks.  So often we grasp to hear and understand. The chanting and foreign terms were relayed in a way that softened that studious grip.

Disc One gives the lay of the land.  Swami Ji takes the time here to explain the what of Bhakti, and details a bit how that looks in action.

In simple terms he almost immediately highlights a main reason I’ve never resonated with many religions – they are based on fear and awe of God. I don’t think I’ve ever come across someone state this so clearly.  I may have even let out a surprised yip and clapped my hands a wee bit in excitement.

Instead of a fear-based approach to God he then offers the path and goal of Bhakti Yoga – love of God.   In his simple and kind way, Swami Ji discusses the power of Bhakti – that of a personal relationship with God.

The discussion on this disc is an excellent extrapolation of hints we are given in the Yoga Sutra: in I.23 where the goal (yoga) is said to be achieved by active devotion to god, and then further on when in II.44 ‘Union with the chosen divinity’ points out that we have choice regarding the aspect of god we work with.

Disc Two spends the fullness of time expressing the parent to child relationship with God by relaying stories of the young Krishna on earth.

While it is not uncommon for lectures to include anecdotes, having a full tale on which to base a lesson is rare and I loved this format. The story was enlightening and thought provoking. Swami Ji spoke with animation.  It was like returning to a prewritten time, when verbal education was achieved through stories.

Wonderfully, in an age of laptops and text messaging, this method is as effective and engaging as ever.

Disc Three lost me a little bit, truth be told.   While I understood the concept of beloved to beloved relationship, I could feel the context of my upbringing and the flavouring of my belief – many unconscious and socially ingrained – and my preferences flaring to life.

Again, the bulk of the talk was woven in and out of a story of Krishna and the Gopis. Some of it I found I knew in passing, and much was fresh and sparkling new.

Even with the struggle not to let my comparing and contrasting brain take over I was able to continue on with the lectures with little issue.

Disc Four shows how Indian philosophy adores lists. This lecture goes through some of the structure that forms the basis of Bhakti Yoga, reviewing the five relationships we can have with God, the ten stages of bhakti experience, and three classes of devotion to Krishna.

If such classification sounds mind-boggling, never fear – Swami Ji chants liberally and recites verses rich with sentiment that remind you of the feeling state, or bhava, of bhakti.  This sort of emotional expression was beautifully delivered. And, again, the information on the lecture topic was drawn out from more stories of Krishna’s time on earth.

It would be great to explore this topic in a group Q & A setting so I’m bummed Swami Ji’s not coming to the South Island on his tour in April, May, June.

Disc Five, whether in relation to God or to our significant others, offers much food for thought on exclusivity and steadfastness.

First Swami Ji allows that there is a time for inquiry and study. Second he reminds us that to succeed at anything we must be attentive and dedicated to it.

The essence of Bhakti Yoga is reviewed again, and it’s clarified that everything is manifest in Krishna and the specialty of Krishna is manifestation of the beloved to beloved relationship.

Swami Ji then goes on to say that devotion to Krishna equals devotion to all forms of God.

So, while devotion to all forms of God do not equal devotion to Krishna, I can rest assured that my dedication to the ‘ideal of God’ that resonants with me is still on track.  In fact, it’s the use of the word ‘ideal as opposed to ‘idol’ on disc four that got me the most excited and been most interesting in my practice.

I’m curious to see what subsequent viewings leave me excited about and look forward to sharing with friends this accessible and interesting lecture set.

Want a copy of Swami Ji’s lecture series Bhakti – The Path of Love?

Leave a comment on this article, or on the Facebook link, or send a tweet (make sure you include @YogaLunchbox so we can track you) and tell us why you need more love in your life.

Get commenting & tweeting because you’ve only got until Sunday @ 6pm (NZ time) to get your entry in. Winner will be announced Monday morning.