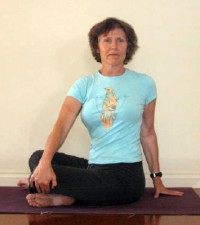 Jude is originally from Canada but for a long time has called New Zealand home.

She has always had an interest in health and is a Registered Nurse, Registered Nutritionist and a yoga teacher in Dunedin.

Originally, Jude got into nursing not for benevolent reasons, but because she wanted to travel. Those travels gave her many opportunities to try yoga.

Over the years her interest shifted from “acute” nursing into a health promotion/disease prevention focus. This passion led her to a Masters degree in Nutrition at the University of Otago and training as a yoga instructor through the International Yoga Teacher’s Association.

You can find her at her purpose-built and intimate studio in Mornington, Dunedin.

I trained with IYTA which doesn’t subscribe to any particular type of yoga. So I guess my style is general Hatha with influences I’ve gained over the years from attending classes in Iyengar, Vinyasa, and more recently, Anusara.

I did my first class when I was 21 years old and living in California. Yoga was the “in” thing so I gave it a try. I can’t really say that it impacted me greatly but I did enjoy it and kept coming back to it over the years.

I don’t think it was an “aw hah” moment. It was a more gradual falling in love process until one day I realized that I was smitten!

It sounds very cliché, I know, but I like to think yoga has made me a better person. I still don’t consistently practice what I preach, but I am convinced more than ever of the importance of trying to be “yogic” as much as is humanly possible.

I think it’s funny because the most “yogic” person I know is my husband and he doesn’t even go to yoga!

I am very lucky to have my own studio where I can “play”. I explore a lot and just do what comes naturally on the day.

Sometimes it is a very energetic practice and other times it is less strenuous but more inquiring and introspective.

I think that for most people asking the question they really want to know what kind of “exercise” it is, as the asana side of yoga is the most visible aspect.

It’s really hard to explain the other sides of yoga to someone who has never “done” yoga before. But I think they see and feel what it’s all about once they come to class.

Hopefully people will go away with a little more understanding and insight about the workings of their bodies and minds.

I like it when a student tells you how good yoga makes them feel and how it particularly helped them to get through a difficult patch in their life. Now that’s a great feeling!

I was at a Donna Farhi workshop a while ago and Donna said something interesting.

It was something along the lines of the point of yoga, for most people, not being about doing 20 minute headstands, but about making life easier –for example, being able to bend down and tie your shoelaces with ease.

And I like that. So I wish that everybody knew that yoga is for anyone who just wants to improve the quality of their lives.

I think that if yoga can contribute to people being less judgmental and more accepting of difference, then it’s done its’ job in making the world a better place.

I think your Yoga Lunchbox idea is fabulous. Thanks!