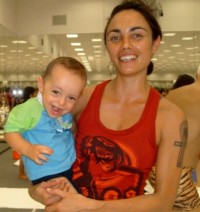 Donna has spent the last while living in Queenstown with her two children, and working at the Queenstown Bikram Studio.

But small business beckoned, so she’s headed over to Dunedin to open up her open Dunedin Bikram Yoga Studio – something that the yogis of Dunedin will no doubt be very excited about.

The studio opened at the end of August 2009, in a space that was going to be an up-market gym. Fortunately for Donna, the gym never happened and she was able to lease the yoga-perfect space for her studio.

1. What style of yoga do you practice and where do you teach?
Bikram yoga, I teach in Dunedin. I have also trained with Nikki Knoff.

My mum used to take me to class with an a Indian lady in Te Kuiti, I just remember feeling calm and stretchy! We moved to Perth a few years later and they actually taught Yoga in Phys Ed at my high school which was quite ‘forward thinking’ for the time. Over the years I practiced sporadically along to tapes and books.

3. When did the yoga bug really get you?
I moved to New York at 21 and went to Jivamukhti- a power yoga variation on the Ashtanga primary series. I had never seen anything like it! it was rigorous and intense and challenging, and left me so still and calm when attempting to deal with the Fashion world!

After moving back to New Zealand I tried to find something similar, but there was not much around so I went back to an on-off practice with my good old Rodney Yee video set!

It wasn’t until after the birth of my first son that I found Bikram Yoga in Wellington. I loved it from the first class – I felt as if I had been wandering through life half asleep and all of a sudden I was wide awake. It took a while for me to get the confidence to leave Hospitality and immerse myself in yoga -it has honestly changed nearly every part of my character (nearly-practicing but not perfect yet!)

4. How has yoga transformed your life?
I have always sought refuge in yoga during bad periods of my life. I have suffered from depression for many years and I was hospitalised a few times in my late teens due to eating disorders. An excess of lifestyle added to the mix for many years, and post natal depression seemed to push me even further down. Without any doubt Yoga, and specifically Bikram yoga honestly saved my life.

It helped me to find strength and peace through the beauty of moving meditation. Bikram yoga challenges me to be present and steady with my breath even when chaos is swirling around. Yoga has definitely made me a more tolerant parent and hopefully a stronger human being!

5. What is your home practice like?
At the moment (until the studio opens here) it is 5-6 Bikram sessions a week in my office or lounge – with the heaters cranked up!

I practice along to recordings of my favorite teachers. Bikram is a very precise series taught the same way every time, I never get bored though as my body and brain are so different every time! Plus its a good way to see where you are at on an emotional and physical level every day.

I sometimes practice restorative at home, but I am a single parent with two small children so the term ‘home practice’ is more like getting jumped on or rolled over with a toy while in savasana!

Bikram is my constant and most consistent practice. When other teachers are around we practice the full Bikram series. This is the 84 postures of the Bikram lineage where you have all the full inversions, arm balances, hip openers, and back bends. The beginner series sets up your body for the advanced series, but that said, I still consider myself a beginner even after 5 years!Tthere is always room for progression. I feel like I could practice the 26 beginners postures for another 10 years and not even tap the surface of where the mind and body can go… that’s a good thing though! I would have quit long ago if it was easy!

6. When people ask you, “What is Yoga?”, what do you say?
Bikram always says:

Yoga makes you – you!

It’s so simple, we are just returning to what we already know – the well spring of health and vitality already exists in all of us. Yoga gives us the tools – postures, breathing, concentration, self control – to tap into and illuminate that source.

7. What can people expect from one of your classes?
I teach a pretty strong and straightforward Bikram class. I appreciate the dialogue we use as it is a powerful tool. I am simply the conduit through which Bikram, and his guru Bishnu Gosh can flow-straight into the bodies and minds of the students. His words, my voice, your body – when the three move as one its pretty amazing.

Nikki Knoff and Bikram (he was actually one of her first teachers!) emphasise the importance of dialogue led classes- so the learning beomes a cellular reaction rather than an attempt to copy my ‘moves’. I would hope that my passion for the yoga comes through and I consider myself to be so lucky to get to do what I believe in and love!

8. What do you love most about teaching yoga?
Definitely seeing the changes in people from all walks of life. Sometimes you are witness to the enormous physical and mental hurdles that can be overcome through the power of yoga, and it is truly life changing. It’s important to remember that for some people simply standing up straight and breathing is a huge victory!

I have taught people recovering from cancer, a woman who has broken her back twice, a member of circa de soleil pregnant women, mental health patients, mums, kids, junkies, olympic athletes.. You really get to bear witness to the full human spectrum, and yet so much beauty emerges!

With the Bikram series we apply the 26 postures and two breathing excersices over and over again and see what unfolds.

9. What do you wish everybody knew about yoga?
That you do not have to be flexible or strong or perfect to do it! All you need is a pulse!

10. What role do you see yoga playing in our world?
A student told me a cool story about an intense bike trek he did through thousands of miles of desert in North Africa. He was part of a huge group of cyclists from all over the globe, most of whom had practiced Bikram yoga in order to get used to exercising in a hot climate. He said that most people could not converse due to language barriers, but every night after a long day cycling the cyclists all practiced the Bikram series together. It’s taught the same way all over the world so they all moved and stretched in unison, the ultimate form of communication and connection – the universal language of Yoga.

11. Anything else you’d like to say?
I feel I learned more on my yoga teacher trainings than I did in 5 years at University. If you ever get the chance do a yoga challenge it can change your whole world!

12. And finally, how do people find you?
At the Dunedin Bikram studio – check out our website for more details.