You are here: Home / Yoga Articles / Teaching • The Business of Yoga / Teacher Interviews / Asha of Ananda on the True Attainment of Happiness 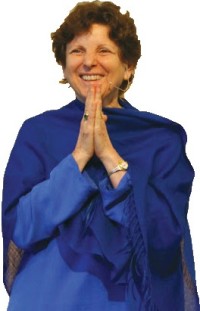 It was the peak of the hippie era when Asha discovered her life path and the teachings of Paramhansa Yogananda, who wrote Autobiography of a Yogi.

While she never studied directly with Yogananda, who died in 1952, Asha ended up spending over forty years with a disciple of his, Swami Kriyananda.

Asha has devoted her life to bringing spiritual understanding to others through teaching, counselling, and writing. Asha means “hope” in Sanskrit.

Her formal title is Nayaswami; she is called Swami Asha in person. She has been known as Asha Praver for many years before becoming a nayaswami in 2009.

Asha was a founding member of the new community Swami Kriyananda  started near Nevada City, California, called Ananda Village  back in the ’70s.

In 1987, Swami Asha and her husband, Swami David, became spiritual directors of Ananda Palo Alto in California, where they continue to serve today.

Now Asha is coming to New Zealand. She’s touring through the country from September 25 to November 2, 2014 and will give lectures and conduct workshops in six cities – Auckland, Wellington,Hutt Valley, Hamilton, Palmerston North and Taupo.

Check the tour details for dates and class descriptions .

Asha’s talks will cover a wide range of topics that make the ancient teachings of Yoga practical and immediately useful to everyone. Thousands of students have received training from her over the past 35 years, and been immeasurably helped by her unusual insight and clarity.

Events will also include chanting and spiritual music performed by gifted musician and long time meditator and teacher Dambara Begley.

I had an opportunity to chat to Asha last week, and we talked about everything from the hippie era and the importance of being in community to happiness and service.

Asha of Ananda on the True Attainment of Happiness

You can see more on Asha and her New Zealand tour here.