You are here: Home / Yoga Articles / Awakening • Creating a More Beautiful World / Musings from the Mat / Am I quitting, or letting go? Apply discernment here. 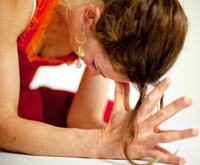 This morning I woke up, ready to film the new video for my PledgeMe Campaign. I’d had a great Skype session last night with the videographer, Nick Tapp, and he’d been fabulous. I’d been excited when we’d hung up, excited when going to bed.

But this morning, I just felt tired. I felt tired as I got my son ready for childcare, tired as I organised dropping my car off to the mechanics for repairs. Tired as I came home and checked my inbox, and my phone.

Two messages in particular stood out for me. Both from friends who have helped me with the campaign to date, both of them too over-whelmed and with too much to do to offer any more help.

I sat down in meditation and felt into my body. I wondered why I felt so dead, so down. Why wasn’t I excited about filming the second video? Where was my connection to Self, to infinite energy, to all that is?

As I sat, and felt into the idea of doing the video, and then all the rest of the campaign that was to follow, all I could feel was a burden. Another thing to do on top of my full & busy life, another thing to do that has no guarantee of offering anything to me in return. I felt into the experience of all these people around me, struggling to manage their full & busy lives, and I had this sense of not wanting to add just one more thing to the mix.

In three weeks time, I’m moving back down south to live with my Mum for a few months. I feel a profound sense of relief at this shift, a sense of going home – even though I was 29 when I first went to Mum’s house in Glenorchy. The mountains are my home.

The three weeks before I leave were going to be full up with campaigning, writing, interviewing, working for Enspiral, packing up, saying goodbye, tying up loose ends, dealing with this and dealing with that.

Once I hit the road, either the campaign would have been successful or it wouldn’t.

I knew in my heart that the idea it wouldn’t be successful was beginning to fill me with a sense of relief. I would have some spaciousness to just travel down south and see what arises, while being a mother to my son. I’d have time to spend with friends and family along the way without working. I wouldn’t be obligated to so anything, for anyone. I’d be free to be me.

But because the campaign was already underway, I also felt a sense of duty, a desire to serve the needs of the book and of the yoga community. I didn’t want to quit, just because it felt good for me.I wanted to serve, truly serve. I was prepared to do what it took to make the book a reality, if that was serving the community.

So this morning, as I sat in meditation, that was my mantra.

And as I felt into that space, I felt myself retreating, withdrawing, settling in, and letting go. I felt in my heart that making this book was not serving, it was something else, coming from a different part of me.

It was already 10am, and Nick was arriving at 10:30am. I had to make a decision fast to avoid wasting any more of his time. I opened my eyes and paused. Felt into my body. My heart was thumping. I could feel fear at calling Nick, fear at saying no to the campaign, fear of letting go, of quitting, of being a failure. Fear of losing face.

So that’s what I did.

I moved toward the fear, felt the fear and dived into it and made the phone call.

I let go of the second video.

I’m letting go of the campaign.

Do I believe that there is an amazing book inside me just waiting to come to life?

Do I need the financial support of the YLB community to make it happen?

Plus there’s something deeper at play here.

Last week, as I worked through the emotional beliefs and patterns that had been initially triggered by the campaign, I noticed something about my energy.

When there’s emotion that needs to be felt, I have a tendency to disconnect from life, from my body, and from my heart. I move away from the pain. This can lead to a deadening sensation, or a depressed sensation. Once I feel into what’s actually there, and be with it, this moves through.

The morning after the moving through, I was out walking with Samuel, and I was all excited and super-energetic. I had a real sense of clarity and go go go about me. Yet, I realised in my walk that this was the flipside of the deadening sensation. It wasn’t a clarity of heart and a relaxing into what is. No, it was a damned determination to make something happen. I may have let go of an old emotional pattern, but I was still using the strength of my mind to drive head-long through life.

This is not a bad thing per se. In fact, it’s a great strength that can be used to make all kinds of things happen.

I knew in that moment that I still had work to do around surrender, around true service, around motivation.

That day, an article from Marianne Elliott showed up in my inbox. Heroism, Dependency and exit strategies, an interview with Batman. This jumped out at me:

If you ask us why we do what we do, we might tell you a admirable story about justice and service. But dig beneath the surface and you will find something less noble. We are the abandoned kids, the jilted lovers, the unjustly imprisoned of the world.

So it’s almost as though the superhero gig is a way to put right what has gone wrong in your own lives?

…superheroes are motivated by guilt, shame, fear and anger as much as they are by love, justice and service. We’re a shadowy crew. No doubt about that.

I’ve been sensing this about myself for some time now. That what’s been driving me to work so hard on The Yoga Lunchbox, and all the spin-off projects like the PledgeMe Campaign has a strong shadow aspect. Last week’s meltdown helped me to sense deeper into what that shadow was – my own unconscious sense of worthlessness and failure.

I’ve been wanting to prove I’m worth something.

See, look at what I’m freely giving you, look how awesome it is, I do have something worth offering, I am worth something.

Batman goes on to say in his interview, Heroism, Dependency and exit strategies, an interview with Batman:

I’m always asking myself honest questions, like what are my real motivations for this work? Am I really doing it to help and serve others, or am I doing it to feel like my life has purpose, like I’m a good person?

These are important questions.

And they are questions I’ll be pondering for the rest of the year I imagine.

In the meantime, I’ll continue to do a damn good job on The Yoga Lunchbox, because I love it, regardless of what motivations may be driving me, or have driven me.

But I’ll also be allowing myself the space to relax.

Without the need to be more, than just, me.