You are here: Home / Yoga Articles / Starting • The Foundations of Yoga / Reviews / Allow the Giant to Emerge: A Review of a Power Living Yoga Retreat 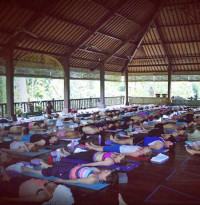 Allow the Giant to Emerge

It’s Friday and I’ve been home from Bali and Teacher Training with Power Living for four days, however I’m only just getting my feet back on the ground.

I knew the training would be intense, but I had no idea how damn intense it would be, or how much it would throw me.

As you’ll find out in the articles after this one this is a good thing. I’ve had a major breakthrough, thanks to the process the Power Living crew put me through last week.

Who are Power Living?

Power Living is an Australia yoga company started ten years ago by founder and CEO Duncan Peak. While he’s unequivocally the leader, one of the strengths of Power Living as an organisation is that it’s not personality driven. If Duncan was to step down, he’s set it up so Power Living would continue, and it would continue to go from strength to strength. He’s not the only owner of the company – there’s another six owners.

Power Living puts paid to the myth that yoga and business don’t mix, and I saw some of the reasons why that is on the retreat I just attended held at Ananda Cottages in Ubud, Bali.

I was on a 500hr Teacher Training module with 23 other students. But there were also 29 students on the retreat doing a 200hr training and another 40 retreat attendees. Running multiple streams at the same time takes advantage of shared resources and means more can be accomplished with less. Brilliant.

Plus, the learning on a Power Living Retreat isn’t limited to the attendees. On the 500hr Training Roxy White was teaching the advanced anatomy classes, with Duncan in attendance for support. Roxy’s got a stellar background in all things anatomy including relevant degrees and working as a masseuse and phsyio. She knows her stuff, inside out.

But this was Roxy’s first time teaching what she knows. So while she was teaching us, Duncan was teaching her. He let her run the show, and would advise her, jumping in with his expertise when necessary. This can be a tricky thing to manage in a classroom situation as it’s all too easy to undermine the lead teacher, but Duncan handled it with a sure and light touch, always supporting Roxy and never undermining her.

In just five sessions we were given in-depth understanding of the shoulder, right down to the nerve functions. But we weren’t just given the information and expected to go away and learn it. Power Living operates on the idea that you should leave the sessions already knowing the info inside out – no study needed.

Because who really goes away and studies? So we were tested, in session, all the way through, until we knew our acromiocoracoid ligament from our glenohumeral ligament backwards and upside down.

But the anatomy sessions, while amazing, weren’t the crux of the retreat. The retreat was called Allow the Giant to Emerge and that’s exactly what is focused on, using two methods.

Primary was Core Belief work, and secondary (which also using this work) was teaching in front of either Duncan, Keenan Crisp or Kristi Clark and being videoed. (Thank god for the video. I was so out of it the day I taught that I can barely remember anything that Keenan said to me. Now I’ll be able to watch the video and soak it all in. Why was I out of it? I’d spent two hours sobbing on the yoga mat. More to come on that in a future article.)

Core Belief work is the cornerstone of everything that Power living does and is why, in my opinion, they are such a powerful yoga organisation.

Yoga is about the psyche, it’s about seeing oneself clearly and peeling away all the limiting beliefs that keep us playing small. The postures are just a tool to help us do this – they help us identify our vasanas.

Power Living get this.

And they live it. All the way through – not just how they teach their students, but how they manage and work with staff as well.

In modern day yoga, the training of your mind and the consequent exploration of consciousness is the main event. The physical practice creates a space for you to concentrate and observe your mental processes. This is a way of developing a greater level of self-awareness, which allows you to begin to examine your belief systems, dismantle the ego that causes suffering and build self-esteem.

While I would quibble over some of the nuances of that statement (I don’t think building self-esteem is necessary or a part of the yogic process) the essence speaks to me.

I love that Power Living is deliberately working with the psyche through the physical practice, and it’s why I signed up for 500 hr training with them.

Right from the beginning of the week, the focus on getting to our core beliefs was clear.

On the Sunday night, every participant was asked to stand and introduce themselves before saying, “And this is me being present with you.” They then had to stand still and quiet in front of 90 people, not speaking, just allowing themselves to be seen.

At every session, there was an opportunity to share with the group. We were asked to get up and speak if things were tough for us, if we were being triggered or if we were finding things hard. It was clear that whatever we were experiencing – whenever we weren’t in our  bliss – it wasn’t because of the external circumstances but because of what was going on inside of us.

This was a revelation for many people. You mean my anger is about me, not about what’s happening to me?

It was a delight for me to watch how the Power Living facilitators skilfully managed to keep 90 people on track all week, focused on examining their internal responses to external circumstances.

When someone stood up and shared, either Kristi or Keenan (Keenan was taking the lead on this work) would ask them questions about how they were feeling, what their reaction was to it, and if it related to something they often experienced. Sometimes they would be guided back to an early childhood memory and the negative core belief fuelling the present-moment reaction would become clear.

At times this could be a brutal process (see my up-coming article about what I went through) and the facilitators did a beautiful job of keeping people together and not losing anyone to their darkness… something that could have been entirely possible because you never know what traumatic circumstances someone might be bringing to a retreat.

By the end of the week, it was abundantly clear that we all had negative core beliefs, and that we had all gained because of them.

The final part of the process was to find a positive core belief that would be useful to use if and when you got triggered because of your negative core belief.

This part of the process I had questions about. In all the work I’ve done I work on recognising the negative core belief, like this article where I discover I had a belief that there was something wrong with me, and I’ve found that bringing awareness to the belief is enough to dissolve it. If and when it comes up again, I see it and release it again. There’s no need to impose a positive belief over the top of it.

However, I have also been doing this work for a decade and my primary identification as a being isn’t with my mind or my thoughts, but with… being. For people who have never done this kind of work before, and are primarily identified with their thoughts, I could see the usefulness of using a positive core belief.

The final powerful part of the core belief work was that Keenan, Kristi and Duncan were up-front and clear about what their core limiting beliefs are, and how they come up in their lives. Keenan shared a story of how he was triggered just the week before, and he shared how he’s sometimes triggered while he’s working with people on stage.

And therein lies the power of the Power Living Crew.

It’s a community of people supporting each other and there’s a genuine desire to see everyone step into their most powerful and bright authentic self and live from that place. There’s a constant evolution as they focus on making the process the best that it can be.

Oh, I should mention, we also did yoga :-). The morning sessions always started with Keenen leading us through a meditation, focused on one of the chakras. Plus we’d have a two hour plus class late morning, and sometimes an afternoon Yin class.

The two hour plus class was physically and mentally challenging and designed to bring people’s stuff up. Power Living classes are rich with yogic philosophy delivered in an accessible way. The teachers challenged us is everyday in a different way, almost forcing us to look at the way our minds work, how we interact with reality, what we believe to be true, how we’re living our lives and what we planned to do when we left the retreat.

While I totally had my arse kicked, it was the most transformational experience I’ve ever attended – more so than even the Prana Flow Teacher Training I did in 2010 although I enjoyed that a whole lot more ;-).

I will definitely be doing more work with Power Living, which means you’re going to be hearing more about it.

Did you go on this retreat, or have you been on a Power Living retreat before? What was it like for you?