You are here: Home / Yoga Articles / Teaching • The Business of Yoga / Teacher Interviews / A video interview with Swami Shantimurti of Ashram Yoga 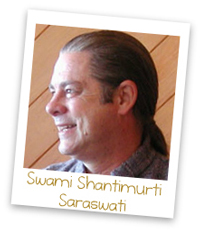 It’s just three weeks until the International Yoga Conference and Festival at Kawai Purapura so I took the opportunity to have a chat to one of the many highly respected yoga teachers who will be at the festival – Swami Shantimurti.

Swami Shantimurti is the senior teacher at Auckland’s Ashram Yoga. He’s been teaching since 1978 and has seen the growth and change of yoga in the West.

According to the bio on Ashram Yoga’s website, Shantimurti  has spent extend periods with highly accomplished yogis and seen many wonders. He has managed a number of ashrams over the last 35 years and seen many of the unusual situations that sometimes come with advanced yoga practice. He has trained many sannyasins, yoga teachers and students.

Shantimurti lives at the Ohui Retreat Centrein the Coromandel and travels teaching yoga in Auckland and internationally.

Because of his depth of experience, I just had to ask the Swami about Yogawoman (got your ticket yet?). I wanted to know whether or not yoga had always been a male practice. Surprisingly, he hadn’t heard of the documentary. However, I read him out an extract from the press release, and you can listen to his response in the videos below.

We also talk about:

– The changes in teaching yoga over the last three decades
– Why being able to personalize a practice is so powerful
– Physiology of postures
-The limitations of studio yoga classes
– The true origins of Yoga in India as both a male & female practice, especially in the Tantric lineages.
– How we’re moving toward a balance of male/female
– Why it’s time for women to claim their power
– What the Dalai Lama said about evolution & women
– How yoga means to yoke, to bring into balance and that applies to the male & female within
– Why Satyananda was the “bent person’s Guru”
– What enlightenment really is
– How to know if you’re really coming from a place of heart
– The importance of developing perception
– The one thing he wishes people knew about Yoga
– And why the world doesn’t need saving.